I am still unsure whether I like or loathe this play. I am unsure whether it liberates women, or entraps them. I am unsure whether the play is a genius meditation on motherhood, knowingly referencing Ancient Greek tragedy, or merely an over-laboured attempt to do so. I am certain that I hate moments of Magali Mougel’s new script (translated by Chris Campbell), which is turgid and over-written at points, but that Jean-Pierre Baro’s direction combined with Caoilfhionn Dunne’s performance to create moments of theatrical brilliance. I guess everything comes full-circle, as the play itself illuminates. 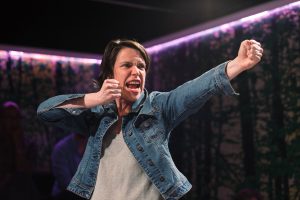 Motherhood is centre-stage. Suzy hates her children – she loathes them, she never wants them in the first place, but it’s the ‘done’ thing for women of a certain age, isn’t it? Suzy Storck is topical, then – particularly in a day and age when women have, arguably, the greatest possible access to careers. The question of self-actualisation bubbles under the text’s surface, as it asks what fulfils women: a career, or a family? It is the depiction of this binary that grates on me perhaps the most, as I think it’s a limiting polarisation. Surely today, in the western world, women can have both? As a rule, women have been socio-culturally depicted as a homogenous entity that divides down the middle: we are madonnas or whores, controlled by passion or by reason, unable to combine the two holistically. After all, it is this latter binary that so defines the greatest anti-mother in cultural memory: Medea. It is also one against which I argue vehemently at university: Medea is neither jealous and hysterical, nor an unfeeling tyrant, but a combination of the two. Nor does she hate her children, if you go back to Euripides’ original text. Comparing Suzy Storck to Medea, then, as many critics (and the Gate Theatre’s own website’s blurb) have, seems anachronistic to me. It also does a great disservice to the complexities of womanhood, of which motherhood is only one facet.

Dunne is fantastic as the troubled Suzy, offering a nuanced, honest and empathetic performance as the resentful mother-of-three. Her supporting cast are similarly strong, but it is the production itself that really provides the play’s other golden chalice. Placing cast members amongst the audience, to speak – in another nod to Attic tragedy – as a Chorus, both with harmony and discord, enlivened moments of script, and offer interesting moments of narration. Having the audience so close to the action, in the round and in Suzy’s living room, played with our complicity and empathy – particularly when we are asked to get involved in clearing the toys strewn stage-wide. Light glares seeringly through a window; conversations are conducted off-stage. The staging really works.

Suzy was once employed in a chicken factory. Her eponymous play attempts to demonstrate that her circumstances have trapped her on a domestic treadmill akin to that faced by the hapless birds. I wonder if, in so doing, it is also guilty of enslaving her to trope and stereotype.

Suzy Storck was shown from Thursday 26th October until Saturday 18th November 2017 at the Gate Theatre. To find out more about the production, visit here…