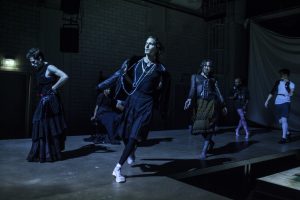 Juliet & Romeo is not an adaptation of Shakespeare’s play but an appropriation of the tragedy. Incorporating elements of Japanese butoh and voguing , the work sees Harrell, three dancers (Cecil Loresand, Jeremy Nedd, Ondrej Vidlar) and five actors (William Cooper, Thomas Hauser, Max Krause, Benjamin Radjaipour, Damian Rebgetz) performing a catwalk show. Harrell transforms the themes of death, mourning and ritual into physical expression. He examines how the tragic moment of death at the end of Shakespeare’s play can be extended and maintained.

The story is told from the Nurse’s perspective, played by Trajal Harrell. Her memories of the two ill-fated lovers is a meditation on death, which is in the centre of the production. The end of the play is the beginning of Juliet & Romeo, which can be seen as a requiem for Juliet. The Nurse is tormented by guilt and self-reproaches. As she recalls the events leading up to Juliet’s death, she remains alone on stage, dancing by herself, wrapped up in her deep sadness.

The bare stage (design by Erik Flatmo) is raised and resembles a catwalk in a fashion show. The Nurse is already on stage as the audience enters the auditorium. Harrell is dressed in black, changing into a black dress for most of the evening. The performers enter, wearing casual clothes, t-shirts and sweatpants, and hand out sheets with excerpts from Shakespeare’s play and their German translation. There is little text but it is spoken in both English and German. The cast recreate a very short version of the tragedy before leaving the stage. The Nurse remains and tries to cope with the burden of her memories: “The mourning has begun.”

This non-linear production is structured by motives and situations as the Nurse remembers the dance when Juliet first meets Romeo, the hatred between their two families, the duel between Tybalt and Romeo, and the death of the two teenagers. Rituals of love and death are combined with the vocabulary of the present – the ritual of a fashion show.

As the performers return, dressed up in a variety of costumes, they use the stage as a catwalk, trying to draw the attention of the audience. The gestures of the dead are recreated as the performers take on different roles, which cannot be seen as characters but merely as aesthetic subjects in this highly stylised production. Their bodies represent different facets of Juliet, they resemble a kaleidoscope creating different kinds of femininity. The performers are in a competition about the representation of real life. Who is best at representing the realness of grief and pain?
An intriguing and challenging production that should not be missed. 4/5

Juliet & Romeo will return on 7th, 8th and 10th December 2017. To find out more about the production, visit here…