Bad Roads is not really a play. Rather, it is a sequence of scenes sewn together into one fragmentary meditation on the brutalities of war. The text’s background is the Donbass region of Ukraine, following the 2014 revolutionary movement that ousted President Yanukovych; its foreground, the effect of war on the female subject, in all its complex, brutalising, all-consuming force. 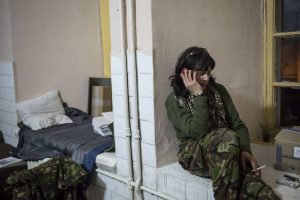 It’s a modern tragedy, then, and, in some ways, reminds me of Euripides’ ‘Trojan Women’. But whereas the Greek tragedian’s women are mythological characters preserved by and within cultural memory, the women that Natal’ya Vorozhbit has written are unnamed: ‘Woman One’, ‘Woman Two’, ‘Teenage Girl Three’. Gone are the Cassandras, the Hecubas, and all of the idiosyncrasies therein: instead, the audience is presented with porous figures whose experience has potential to resonate with our own. How different are, or would we be, really? This is an interesting theatrical device, but otherwise the script feels over-written at times, and jarringly episodic. Opening on a thirty-minute monologue is tough, and that particular vignette is, perhaps, not performed with enough variation of tone or pace to make it compelling throughout – although the directorial decision to stage the disembodied voices of other characters within that monologue by way of microphone amplification is suitably eerie. And the line ‘Conviction is contagious, did you know – you can catch it through oral sex’ is one of the best I’ve heard for a while, perfectly imagising irrational thinking in the language of disease.

It is directorial nuances that really develops the play. One particularly grisly scene, performed with gritty power by Ria Zmitrowicz and Tadhg Murphy, staged Sarah Kane-esque moments of sexual and physical violence in pitch darkness, or with ten metres of distance between the two actors. The implication of violence is perhaps more insidious than the act. There is, after all, great critical discourse on whether violence onstage works full-stop, or whether it elicits comedy through its sheer theatricality. It is why Gloucester’s blinding scene, in King Lear, is infamous. This scene was the play’s highlight, aided by nuanced performance, dynamic direction and difficult text. The set similarly conjures atmosphere: stark tree trunks stretched out of plastic-tiled floor, a couple of chairs littered the space, an industrial freezer held the plastic-wrapped body of a soldier.

Vorozhbit’s play meditates on the brutalising effect of war – on women, but on men, too. It considers the cycle of violence and hate that springs from such devastation, and the cruelty with which humans can treat each other. It is not new material, then, but neither does that make it old. Vicky Featherstone’s direction works with Camilla Clarke’s design, and Natasha Chivers’ lighting, to create the play’s dark narrative – but it is the extent to which this narrative is ripped, ruptured and ragged that is its ultimate downfall. 3/5

Bad Roads is currently showing until Saturday 23rd December 2017 at the Royal Court Theatre. To find out more about the production, visit here…