Judas premiered in December 2012, when director Johan Simons was still artistic director of the Münchner Kammerspiele. Simons headed the theatre from 2010 to 2014/15, and several of his own productions were invited to the Berliner Theatertreffen – Sarah Kane’s Gesäubert/Gier/Psychose 4:48 (Cleansed/Greed/Psychosis 4:48, TT 2012) as well as Elfriede Jelinek’s Die Straße. Die Stadt. Der Überfall (The Street. The City. The Holdup, TT 2013). In 2013, on the occasion of the 100th anniversary of the Münchner Kammerspiele, the magazine “Theater heute” granted the “Theater of the Year” award to the theatre. 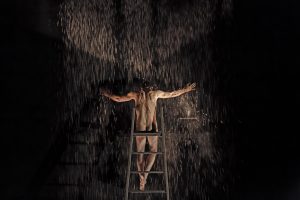 The monologue Judas by Dutch author Lot Vekemans returns to the Kammerspiele for only a brief stint. Well received at its premiere, her solo-play focuses on a man who has been universally vilified for two millennia. But without Judas and his betrayal, Jesus would not have been crucified – which did lead to our redemption – and Christianity would not have become one of the great world religions. Yet it is Judas who is shamed and detested. Judas is bearing the sins of the world, his name synonymous with betrayal.

Judas (Steven Scharf) knows that his audience has preconceived ideas about him and tonight he is going to work on his image by telling his hitherto “unknown story”. Honesty is important to Judas so he first appeals to the one person in the audience who has not paid for his/her ticket to stand up and pay up. Needless to say, without avail.

He reiterates his years with Jesus, pointing out that there were a variety of messiahs looking for disciples at the time, yet only Jesus convinced him because he was different. Judas followed Jesus hoping that he would fight Rome but Jesus had other priorities. This disappointment fuelled Judas’s willingness to betray the Messiah.

Yet the play actually focuses on the contradiction between belief and doubt. Judas thinks that believing is not productive but doubt is because it leads to action. People who believe do not want change. Doubters, however, want to initiate change. Judas tries to engage his audience, to make them see that we are all culpable- to detect the Judas in each of us.

The stalls are sealed off for this performance, the audience is seated only in the circle. The auditorium is dark. A naked man is crouching on a narrow platform, his back to the audience. He is illuminated by a candle and seated on top of a ladder, in front of the iron curtain (stage design by Bettina Pommer). Steven Scharf, who plays Judas, initially remains with his back to the audience, occasionally turning his head. He later climbs down the ladder and spreads his arms as if crucified, and in the end he crouches on the lower stage – the hell where he came from -, presenting his profile. When he mentions the thirty pieces of silver, a rain of rubble and dust rains down on him, which happens on several occasions.

Johan Simons‘ production is not naturalistic but stylised, centring on the charismatic Steven Scharf, his voice tortured but clear, who creates enough tension and suspense to make this a truly compelling evening. 4/5

Judas was shown at the Münchner Kammerspiele. For more info, click here…