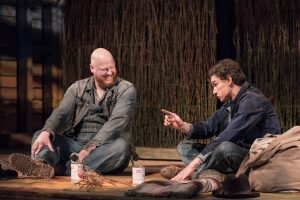 Of Mice and Men, produced by Selladoor Productions, in association with The Marlowe Theatre, started off its UK tour in February 2018. Set in the 1930’s and the trying times of the Great Depression, the story follows George and Lennie, two migrant workers both sharing the same dream of a quiet, fulfilled life. It is a heartbreaking story, depicting the bonds of friendship and holding on to your dreams.

The production is powerful and engaging. The set and lighting design, although minimal, is used to convey the huge structure of a timber barn. Smaller structural designs are easily created by pulling frames into different positions, done with the clever use – and welcome addition – of movement and music.

Characters and their relationships with each other are at the heart of this story. The slow paced narrative allows for real character development and building of friendships. Richard Keightley portrays the tenacity and loyalty of George, falling more easily into the role as the play progresses. Matthew Wynn is perfectly cast in the role of Lennie. He is gentle and shows an air of vulnerability and innocence in equal measures. Kevin Mathurin commands the stage in his role as Crooks, the black outcast, depicting the realisation of social exclusion, loneliness and status.

Of Mice and Men is thought-provoking and powerful from start to finish. It is the perfect production for those who know the classic story, and for those who are experiencing it for the first time. 4/5

Of Mice and Men was shown from Mon 29th January until Saturday 3rd February 2018 at The Marlowe Theatre. The production is currently on tour, to find out more, visit here…