On entering the Jerwood upstairs theatre one is first struck by Fly Davis‘ tongue in cheek set design: a tasteless boudour of pink satin, lace curtains and an intimate thrust staging in which the audience are also lit. The pre-show soundtrack of squelchy synth, hits a downmarket wine bar tone, the only thing missing is a bowl of car keys. It is dated, it is provincial, it is oh so British and it sets the tone perfectly. 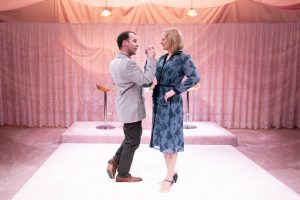 The play’s premise is simple, we are introduced to sexually estranged couple, Jimmy (Jonjo O’Neill) and Jess (Sophie Russell); they share their desires with us, hang ups and differing perspectives, with the intention that tonight, before the audience, after 14 months (and 4 days) they will finally have sex.

One of the play’s biggest strengths is its inventive and reflexive use of form. Generally performed in direct address, it combines dialogue, confessional monologues, meta commentary, brief flashes of highly stylised irreverence and moments of gentle audience interaction.

The mix of theatrical devices keeps the text heavy material engaging throughout its 75 minute run time, however it seems more could be done to delineate between the fluid shifts of form, the rules don’t seem fully established meaning the show can feel slightly messy at times. Writer and Director Anthony Neilson acknowledges this looseness of form, on more than one occasion the couple bicker over whether or not they can hear each other’s monologues when both are lit. The audacious and varied approach to staging does prove to be rewarding, one particularly well judged moment of formal experimentation, where the actors face the audience, describing the actions that are taking place, is one of the show’s most touching and memorable moments. It also happens to be one of it’s least animated.

O’Niell and Russell’s performances are rigourous, precise and thoroughly entertaining. Both embrace the rythym of the text, savouring the rapid comic beats as much as the lingering awkward silences, while also achieving much with their detailed physicality. Neilson’s script is fast moving and comic, with plenty of incisive observations and assertions, but it is also incredibly dense, covering a wide gamut of subjects around sexuality. A particular pre-occupation appears to be male guilt over patriarchal norms. Jimmy is constantly self scrutinising, justifying and apologising for his actions as he desperately seeks to reconcile his morality with his physical desires. He frets and flagellates over his previous sexual behaviour, “Did she consent or relent?” he asks regarding a previous partner with whom he shared an ambiguous encounter. It’s one of many pertinent questions, namely in the face of shifting gender dynamics in public, to what extent do we also politicise our actions in the bedroom?  “I don’t know if its allowed anymore” he goes on to ask while recalling a once innoccous turn on.

The play is at it’s strongest when the couple appear to embody something universal, while discussing the aggressive sex scenes of 80’s Hollywood, Jimmy asks Jess “Did you mind the rough stuff”, the question achieves a resonance beyond the situation on stage and the couple briefly stand in for the entire history of hetrosexual relationships.

There is a disturbing revelation towards the play’s climax that feels like a slight miss-step, I won’t reveal it here but it steers the play into familiar thematic territory for the The Royal Court. It raises an uncomfortable question, which is quickly subverted by a comic diversion, providing relief but at the cost of undermining any deep consideration of the issue at hand. This is the problem with this otherwise incredibly entertaining production. The Prudes’ lack of narrative action requires it to constantly shift in tone to ensure it remains engaging, but its tendency to avert our eyes from its ugliest insights, is more one night stand than long term relationship, it thrills in the short term but leaves a lingering dissatisfaction. 4/5

The Prudes is currently showing until Saturday 2nd June  at the Royal Court. To find out more about the production, visit here…