The Fall @ The Southwark Playhouse Review

What will the millennials of today look like in twenty, even forty years time? James Fritz’s The Fall, commissioned as part of the National Youth Theatre’s 60th anniversary, asks exactly that. Will we still be splurging our house deposits on avocado on toast and be glued to our mobile phones? It’s impossible to predict, but chances are the worries and fears of today will still blight the society of tomorrow. 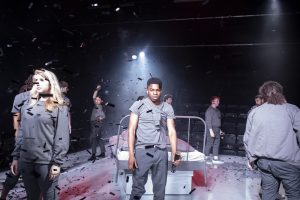 Showcasing the extremely talented members of the National Youth Theatre, The Fall has a certain post-apocalyptic Beckett meets Alice Birch vibe which feels highly refreshing. Broken into three vignettes, the script discusses our relationship with the physical impacts of old age, our relationship with our elders and what the future holds for how we deal with an ageing population.

Naturally, the National Youth Theatre cast are all stellar up-and-coming actors that despite their young looks are already leagues ahead of their contemporaries. Their rhythm and timing are perfect, both dramatically and comically – quips like ‘I’m not having sex with you in McDonalds…again’ are delivered with ease.

Jesse Bateson as ‘Girl’ and Niyi Akin as ‘Boy’ share a beautiful chemistry in their opening scene. A comedic romp ends abruptly when they find the frail body of the 92 year old guy whose house they’ve broken into. But it’s Troy Richards and Sophie Couch as ‘One’ and ‘Two’ who really get their teeth stuck in to the script during their scene, masterfully directed by Matt Harrison.

One and Two exchange short, stylised dialogue that details the complicated journey the pair go through together. The cushy romanticism of love and marriage soon unfolds to reveal the economic pressures of growing old, and the brutal realities of doing all you can to do what you think is best. This gorgeous scene is framed by the two constantly making and stripping the stark, grey bed that forms a basis for all three vignettes.

In the final section, actors Josie Charles, Madeline Charlemagne, Jamie Foulkes and Jamie Ankrah take on the almost anonymous characters of A, B, C and D respectively. A is a plucky o.a.p who has just entered a retirement home of the future. Sharing a room with the other odd ball characters A soon realises that what she’s signed up for isn’t perhaps what was advertised to her.

The narrative of an ageing population plays throughout the undercurrents of this section, with Lucy Havard playing the youthful and unsympathetic Liaison officer keeping everyone’s expectations strictly in check. Fritz is clearly questioning what the future holds for our society if we can’t look after our elders, people who clearly have far more to give than we give them credit for.

Each section is broken up with feet stomping, sass driven choreography (Rebecca Hasketh-Smith) which pulsates an energy that doesn’t diminish easily. Though the subject matter of The Fall isn’t the most original idea ever used for youth theatre it still radiates a thrilling charm. 4/5

The Fall is currently showing until Saturday 19th May 2018 at the Southwark Playhouse. For more information on the production, visit here…