Not Talking @ The Arcola Theatre Review

Isn’t love a funny old thing? It’s that emotion that gives you butterflies in your stomach and pains in your chest. It’s the feeling of being brave whilst at the same time you’re terrified. We see love everywhere; from the mother tending to her child that’s just fallen over, the young couple taking selfies in the park, to the man playing Frisbee with his dog – it’s all around us and chances are, we’ve felt it at least once. 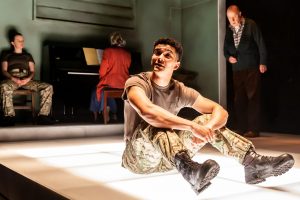 This play sees two elderly people, James and Lucy (Mark Horovitch and Kika Markham) and two young soldiers, Mark and Amanda (Lawrence Walker and Gemma Lawrence) all going through a feeling of disillusionment. James had an affair and Lucy knows, but she refuses to say anything. Amanda was raped, which Mark saw, but he isn’t saying anything either. Each performance is subtly brutal, portraying the intense pain that concealment can bring.

Considering this is Bartlett’s first ever play, it’s a remarkable achievement. From it you can really see how his form and style in later years has stayed true to his original roots. Every line makes you feel something, even if you can’t verbally express it yourself. The text lands as light as a feather, but is weighted with a severe sharpness, that hits the audience with several guttural punches.

One thing’s for sure, love isn’t easy. But if you stick with it, perhaps everything will be alright? 4/5

Not Talking is currently showing until Saturday  2nd June 2018 at the Arcola Theatre. To find out more about the production, visit here…