The Plague @ The Arcola Review

In this adaptation of Albert Camus’ La Peste, entitled The Plague, Neil Bartlett creates a contemporary version of the existential novel that is chilling. While the adaptation is very loyal to Camus’ novel, there are two noticeable elements missing from Bartlettt’s version: exact date and location. 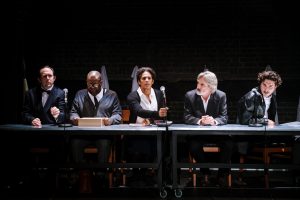 In Camus’ version, the plague appears in the 1940s in Algeria. However, Bartlett is less clear on the year or location of the city, leaving them unaddressed. This delocalises the story, taking it away from its known connotations to Nazism, and suggests that this could be anywhere, even here and now. This realisation is chilling and aids to create the sense of despair felt throughout the piece.

Bartlett’s staging is cleverly thought out as each element presented on stage serves to create an unsettling atmosphere that is in tune with the anguish of the text. Recorded voices of rats and victims suffering in their dying moments are heard at various intervals. The set also feeds into this, as there are only five chairs and two metal tables on stage, which highlights the stark atmosphere permeating this piece.

The actors’ movements are essential to the narrative as they have a very barren stage to work with. Most of the story is conveyed through the narrative retelling of the facts of The Plague. The actors illustrate moments of the tragedy, often taking on several different roles to recreate specific scenes. Sara Powell plays Dr Rieux, the resident doctor in charge of finding a cure for the Plague. Her interpretation is subtle and moving. It serves to colour the piece with both the calm and collectedness of a doctor who is trying to handle an impossible situation. Martin Turner’s effective interpretation of Jean Tarrou makes his character very warm and memorable. This interpretation contrasts well with Powell’s as both characters seem to feed off of each other’s energies.

This show is an interesting contemporary revival of Camus’ novel and well worth seeing for anyone who is looking for a foray into the dark despairs of existentialism. There is one question left to plague us (pun intended). Camus’ Plague was meant as an analogy for Nazism, and the fight against it was a representation of the resistance. We can easily imagine what currently plagues our society, but what then is the cure  – or in other words – the resistance we are putting up against our current Plague? This show gives no answer and this is perhaps the most chilling revelation this production has to offer. 4/5

The Plague is currently showing until Saturday 29th September 2018 at the Arcola Theatre. To find out more about the production, visit here…