Following its huge success in Edinburgh in 2017 , Adam finds its new home at the recently renovated Grand Hall of the Battersea Arts Centre. 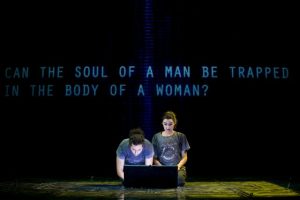 Gender identity and asylum are intertwined in Frances Poet’s insightful Adam which maps out the real account of its leading performer, Adam Kashmiry, and his personal journey of discovering his gender identity.

We meet Adam as a young girl in Egypt defying his mother’s wishes for him to wear fluffy pink dresses and act like all the other good girls. But for Adam, that idea was hard to fathom, because even as a young girl he knew that wasn’t right.

And so begins the story played by Kashmiry and Rehanna MacDonald who both play the physical Adam and his inner thoughts, in addition to the other characters who go on to shape the man Adam grows up to be.

Life in Egypt is hard for Adam, exploring sexuality is a sin but sexual assault is a regular occurrence. The plot slowly bubbles away and soon Adam is locked in a situation where all he can do is flee and seeks asylum in Glasgow.

But there is a burning question ripping Adam apart. ‘I feel like a man trapped in a woman’s body’ are the words he types in to Google, and from there a whole world of understanding begins to unravel.

Cora Bissett’s direction is playful, full of discovery which is echoed in the set (Emily James) which opens and unfolds comically and intriguingly. The action is framed by mannequin arms and legs crammed around the stage, the metaphoric body parts that set up our ideas of what makes a ‘man’ or a ‘woman’. The Adam World Choir provide choral interludes that beautifully set the tone of the piece, though the choir are barely utilised enough.

Poet’s script has moments of visceral beauty, the testosterone Adam administers himself is ‘oily and thick’ and contorts his body into painful spasms– a graphic reality for many transgender people who are left to seek their own medical support through the black-market.The plot often tries too hard to appear more relevant, mostly in making hazy references to the Arab Spring uprising.

Adam appears to be Bissett’s vision that has high hopes of resolving issues far beyond what Adam Kashmiry’s real story addresses. Is this a story about asylum for trans* individuals? Or maybe it’s a call for governments to readdress their problematic approach to supporting transgender people? Or is it about the extreme lengths people across the world go to so they can live their authentic lives?

Adam is an intriguing story of survival that sometimes messily gets confused in itself. This is a gripping story that needs ironing out for it to become the pathos inducing force it rightfully deserves to be. 4/5

Adam is currently showing until Saturday 29th September 2018 at the Battersea Arts Centre. To find out more about the production, visit here…