The Prisoner @ The National Theatre Review

In a lonely desert, away from everyone and everything else, a person waits. A punishment for killing his father, Mavuso has been awarded a unique deal – to sit outside a prison, and stare at it until he decides that his reconciliation is over. There is nothing keeping him there, yet he remains. Trapped by his own sense of moral compass, he has become a prisoner to life. 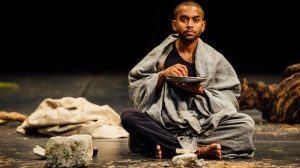 Acclaimed and award-winning theatre director Peter Brook, alongside his often collaborator Marie-Hélène Estienne, bring a complicated and underwhelming piece to the National Theatre’s Dorfman stage. An interesting notion on paper, in practice the vision is never fully realised.

You can however see the theory behind the many concepts; unfortunately it doesn’t translate in practice. There are a lot of questions being asked, but there are no answers given, and the ambiguity isn’t strong enough to retain audience attention. Moments are never fully explored and none of the ideas never really come to fruition. Mavuso, played superbly by Hiran Abeysekera (the pieces only saving grace), never tests the limits of his freedom. As far as he’s concerned, he’s been punished and therefore continues his isolated existence. Does this make him moral, or a fool? Another question we are left to ponder.

Other characters are inputted to provide additional queries. Prison officers, who are panicked by his presence, attempt to make him move – he’s apparently “undermining the system” for being too obedient. Others are confused at Mavuso’s actions too, but none of this really adds any drama. The entire event only lasts 70-minutes, but my gosh, it feels long. Brook’s notions of wanting to destabilise theatrical norms work to his detriment. His theory gets in his way as his bare stage swallows everything up. It doesn’t feel like much directing has happened. Actors walk on, and then walk off – that’s about it. Not very ‘revolutionary’.

This is the work of a theatrical legend, a man who’s books I’ve read and admired for many years. And now, seeing his work in person, it ends up being a huge disappointment. It’s the first dud in the Dofrman in a while. 2/5

The Prisoner is currently showing until Thursday 4th October 2018 at the National Theatre. To find out more about the production, visit here…

« Previous post
What They Want To Hear @ The Münchner Kammerspiele Review
Next post »
Performer Colette Redgrave talks about taking on the role of Olga Khokhlova in Flying Elephant Theatre’s Picasso’s Women!