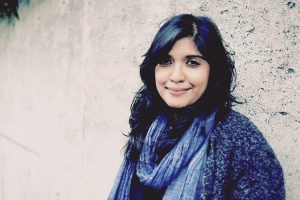 Hi Dipika! Your play, The Art of Gaman will make its UK debut at Theatre503 from early October. How are you feeling ahead of the run?

I’ve been working on The Art of Gaman for a while now and have done workshops and heard it out loud but there is something totally irreplaceable about seeing a play produced for the first time. It’s a strange and fascinating experience to see something you had in your head in three dimensions. I’ve been really fortunate to work with a really brilliant director Ailin Conant who also happens to have a deep personal connection to the material so it’s been a wonderful process. I’m particularly interested in what the resonance will be with British audiences in this moment. I wrote this play before the last American election when there was rising Islamaphobia in the United States and in much of Europe. I wanted to recall other moments in time when immigrants become targets on the grounds of their ethnicity alone. I’m really interested in what living inside of history feels like – while this subject matter might feel like it’s better suited to the novel in many ways, I am obsessed with trying to see if it can be theatricalised. So in that way every new play I write is an experiment and of course it’s scary because you’re never sure what’s going to happen or if it will work.

The Art of Gaman explores displacement, as the play’s lead navigates a new life post the Hiroshima bombing. What inspired you to create a piece exploring this particular historical event and character of Tomomi?

As a writer, I’m interested in the point of intersection between large historical trauma and our own small lives. I’m also interested in the way in which immigration itself is a kind of amalgamation of a lot of different kinds of unspoken traumas. I’m really interested in how these large tracts of silence live inside of us. And their in their expansion and contraction over the course of time. After Pearl Harbor, Franklin Roosevelt ordered the incarceration of well over a hundred thousand people of Japanese descent (mainly on the west coast) to be sent to internment camps in disparate parts of the country. I knew a few things about my protagonist before I started writing the play. I knew she would marry a man she’d never met before to avoid being interned. So I knew Hiroshima was the next major historical event she would encounter. I also knew she would never speak of it. This is why the play uses a really theatrical device to try to capture the experience of Tomomi’s inner voice.

An epic story that is told lyrically and with humor about what it is to be a human being living in time.

I suppose I’d like the audience to have an experience they weren’t expecting! And to perhaps see their own lives in a different light.

The Art of Gaman was shortlisted for the American Playwright’s Foundation’s Relentless Award – an initiative set up in honour of actor Philip Seymour Hoffman and his pursuit of truth within theatre. How did it feel to make the shortlist?

Like so many of us, Philip Seymour Hoffman’s body of work and what he brought to his performances stood for a kind of tremendous honesty and courage. I wish I could have known him. I love that this award honors plays that are attempting to create new theatrical languages and landscapes which does take courage. It was an honor to be on this shortlist with the incredible work of Kate Tarker, Celine Song, Terreance Arvelle Chisholm and Dave Harris.

The Relentless Award looks for plays that are challenging, fearless, are not mainstream, exude passion and are truthful. Are these qualities that drive your work as a playwright?

In naturalism, there is a tendency for the modes of behaviour to be particularly guided by subtext or what is felt but not stated – it’s kind of like the study of the art self concealment. I am much more interested in the truth of the character’s experience and bringing that to light, rather than focusing on the ways we try to obfuscate. I’m less interested in what we might recognize as ‘real’ and more interested in the way that theatricality allows us to tell the truth in bolder ways than we might in real life. I also think because of of my bi- (and now) tri- cultural upbringing and experience my voice – which is matter of fact, funny and poetic – combined with my interest in heightened theatrical landscapes, my interest in ambivalence ( or the nature of what it is to fall in between or defy categorisation) my work might be considered not mainstream. It’s certainly not because I’m trying not to be mainstream! Of course as a playwright all I want is to share my work with audiences and for the work to create a shared experience and a conversation.

The Art of Gaman is directed by Theatre Temoin Artistic Director Ailin Conant. How have you both worked together to realise the play?

It was Lisa Spirling, the Artistic Director of Theatre 503, who thought of Ailin when we were first talking about the play getting ready for its first reading at 503. It was not only a brilliant idea because Ailin is an amazing director, there was also some synchronicity at play because Ailin is Japanese- American and had a very close connection to both the ideas and the form of the play. We loved working together on the reading and began working almost immediately on crafting a timeline for staging it. We have over the past year, talked a great deal about the themes of the play, the way it moves through time and collaborating on how to translate the play theatrically. We also did a workshop of the play a few months ago at 503 with actors so that I could try some things with the text and so that Ailin could play with it on its feet.

I sit in solidarity with playwrights! We all want, I suppose, to catch the light of something through language that gestures to an experience beyond language. It’s difficult. And rewarding. Tea helps.

The Art of Gaman will be showing from Wednesday 3rd until Saturday 27th October at Theatre503. To find out more about the production, visit here…