I firmly believe that if Virginia Woolf were alive today she and her lofty set of literati would be stomping around East London somewhere – floating between the fringes of privileged society and the liberal arts world sipping a kale juice or soy latte. In my eyes, it’s appropriate then for Hal Coase’s adaptation of Mrs Dalloway to find a home at the fringe Arcola Theatre in Dalston. 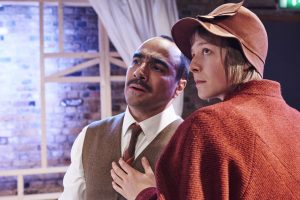 Coase approaches the text of Mrs Dalloway with a keen, if not overblown, eye. Dismantling verses and flip-flopping between scenes and characters, this adaptation illuminates the original novel’s non-linear structure in a way that comes across as experimental and explorative.

Director, Thomas Bailey, takes a similarly ‘experimental’ approach. Playing with the temporal possibilities of the piece, he haphazardly plonks modern day references like Oyster cards, voice recorders and copies of the Metro that feels overly lost in semantics.

The cast open by breaking the fourth wall, telling the audience that they feel a tad ‘nervous’ about tonight’s performance. I’m not surprised, I would be too if I had to remember over one hour forty’s worth of flowery text, and countless character changes.

In post WWI London, Clarissa Dalloway saunters about doing last-minute prep for a party she is hosting that evening. Clare Perkins plays the eponymous character with the fun yet empathetic spirit needed for any high society social climber. Along the way Mrs. Dalloway recounts her missed opportunities in love – Peter Walsh the opposing force to her husband Richard’s mild manners and Sally Seton, with whom she shared a short tryst that is explored in one of the many flash backs.

Meanwhile, war veteran Septimus (Guy Rhys) and his wife Lucrezia (Emma D’arcy) are left battling the effects of living with post-traumatic stress disorder. Rhys has a vigorous charge in his delivery, it is just a shame all his scenes are cluttered by the clumsy direction.

Conference mics, that annoyingly crackle and pop, are used throughout the piece to illustrate a meaning far beyond my comprehension. At Clarissa’s party, each actor uses these microphones along with a multitude of nametags to depict the various attendees. It does create the hubbub of a thriving social scene but the metaphor is a rather unsubstantial.

Woolf was a writer who pushed forward contemporary ideas on gender, sexuality and equality but these themes were mislaid, distracted by all the hidden metaphors. I hate having to read a plot summary on the tube home, but for the uninitiated you might just have to with this production that seemingly drowns in its own pretention. 2/5

Mrs Dalloway is currently showing until Saturday 20th October 2018 at the Arcola Theatre. To find out more about the production, visit here…