As we enter the slightly dated but characteristic Ferneham Hall in Fareham, the atmosphere is building ahead of Jamie Raven’s 2018 UK tour Making Magic.People of all ages habe flocked to the theatre to see, as Jamie later tells us, “the most talented human of 2015”. He of course came 2nd in Britain’s Got Talent losing only to Matisse the dog. 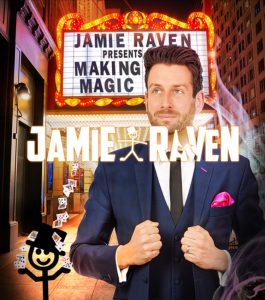 Inside the theatre, we are greeted with on-screen messages informing us to upload a selfie to have the chance to be a part of the show. Of course we oblige, as do most of the audience, but (maybe luckily for us!) we don’t get chosen.

The on-stage screen is used throughout the performance, making sure even the people seated at the back of the theatre can see the amazing close-up magic in full and that nothing is missed. The opening routine featuring ‘Jamie from the past’, which has been recorded three months ago and streamed to the large screen, maybe takes some energy out of the beginning of the performance but it isn’t long before ‘Jamie from the present’ races onstage to huge applause.

When reviewing magic, we have to be careful not to give any of the tricks away but Jamie makes it clear that, unusually for the theatre, he doesn’t mind if you take photos or videos throughout the show. I doubt any videos recorded will do justice to the tricks though as you really do have to see it to believe it!

The magic is varied and features full interactivity with the audience throughout. At the end of Act 1, there is an astounding routine in which the whole audience join in from the comfort of their seats. During the interval, you can still hear quizzical muttering, questioning how it is done!

The second act, although shorter than the first, is equally as impressive and features poignant moments of the magician speaking directly to his audience, explaining how dreams really can come true – if you believe. The finale of the night involves a young girl from the crowd realising just this.

Children and adults queue to have photographs (and floss competitions!) with the star of the show in the foyer afterwards and Jamie kindly obliges until everyone has been spoken to. Overall, it is an extremely entertaining night of variety with moments of comedy and reflection. I bet Matisse the dog would have struggled to pull off some of these tricks. 4/5

Jamie Raven:Making Magic was shown on Saturday 20th October 2018 at the Ferneham Hall as part of his UK tour. To find out more about Jamie, visit here…