The hints of a troubled city create a current under-running Rona Munro’s 1991 play Bold Girls, not so much dominating the action rather than leaking through. 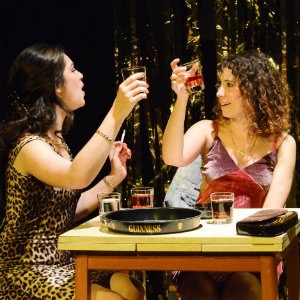 True, the premise is brought on by the troubles: all of Munro’s women are without partners, fathers, sons or brothers. The men are behind bars and the women are left behind, scars of this experience coming to the surface whenever Marie (Sarah Kempton) nervously checks the window after hearing a shot. Similarly chilling is the way that acts of remembrance are ingrained into a night out at the local pub. It’s all horrific, but it’s par for the course in among a round of The Price is Right, as commonplace as ordering another round. The music that plays directly after a police raid? “Ooh baby do you know what that’s worth?/ Ooh, Heaven is a place on Earth…”

The eponymous ensemble of anti-heroines are a brittle bunch, grating on one another in a thousand tiny ways. Alice Imelda’s Carrie is ready to burst: happy to spill out of her dress, itching to spill her fears to Marie at the impending return of her repulsive husband. Her meticulous attention to public appearance signals her readiness to leave town at the drop of a hat, made even more tragic by the fact it’ll never happen.

Contrast her with Carrie’s mother Nora (Christine Entwistle), and it’s all too easy to imagine how the power dynamic works on the surface. Carrie’s all confidence, Nora’s knocked back by a piece of fabric. However, as the play unspools revelations and different views on the past, Entwistle’s once comedic narration of Nora’s hassles transforms from slapstick to abuse. Bobby Brown‘s direction makes a strong case for Nora’s resilience: she screeches her version of events over the top of Carrie, silencing her outspoken daughter in a rare moment of complete role reversal. Nora stand her ground, however momentarily: this once she won’t be pushed aside.

That Imelda’s vivacious performance endears us to Munro’s most morally reprehensible character is a strength of the show, though there’s a definite lack of tension for the audience in the second half. It’s likely we’ve been spoiled by the wealth of dramas in the last twenty years: I’m sure mine wasn’t the only mind whirring with the conspiracy that Carrie spent more time with Marie’s late husband than Marie herself was aware. When this reveal is brought to light, it’s been so foreshadowed that it carries little impact. Kempton spits out words and trashes her apartment, but it feels affected by the lack of punch the inciting news.

At this moment, the show takes on a more generic kitchen sink drama quality which undermines that careful work Munro’s done to recreate West Belfast in the early nineties. It causes me to come out of that setting, thinking how exactly the environment’s impacted on the action. Men are imprisoned, oaths to Mary are uttered, yes, but with adultery and domestic abuse and the need to escape, Munro’s words could now be lifted from a drama set anywhere else. Written by a Scottish playwright, performed by English actors, watched by a Yorkshire audience: does Bold Girls really convey a sense of what it was like living in Northern Ireland? How can I even judge? 4/5

Bold Girls, shown as part of The Lake Season was shown from Tuesday 13th until Wednesday 14th November 2018 at the York Theatre Royal. To find out more about the season, visit here…