For every ridiculous scrape P. G. Wodehouse’s hapless hero Bertie Wooster lands himself in, the ever resourceful Jeeves is able to fish him out. That’s the premise that’s kept Wodehouse’s most well-loved double act entertaining readers for generations- but how to translate it to stage? It goes to follow that just as Wooster seems almost too nonsensical to function, this adaptation of Code of the Woosters would require a little suspension of disbelief. Jeeves’ ability to conjur up a number of solutions is akin to high society fairy dust, and the result is a pretty magical. 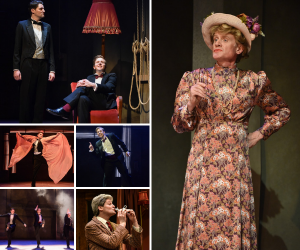 The set designed by Colin Falconer has been left deliberately undressed: we’re transformed backstage with only Bertie’s lamp and armchair in a corner, a fourth wall break in itself. It’s typical that Wooster would defy the illusion of theatre for the sake of a comfy spot: Thomas Richardson is every inch the bumbling but ultimately well-meaning chap, his clear joie de vivre (or, in Bertie-isms, a “je ne sais joie”) radiating from him in each scene. Richardson’s easiness with the audience feels earned without being strained for, and his airy narration breezes over the cracks left in scene changes. True, there are some stretches of scene transition which feel overlong: there’s a lot of behind the scenes tomfoolery required to pull off what unfurls on stage.

It’s worth the occasional pause in proceedings: at its slickest Philip Watson’s direction keeps dialogue snappy and actions ludicrously over the top, as it should be to guarantee the comedic payoff. Theo Fraser Steele’s Jeeves and James Duke’s Seppings jump into all roles around Totleigh Towers with indefatigable enthusiasm, which is worth the payoff with characters as instantly fleshed out as Fraser Steele’s Gussie Fink Nottle. Claire Nichols has done some superbly effective work with the attention to detail in costuming: by having Jeeves and Gussie wear similar costuming, the transformation between characters further enhances Fraser Steele’s stirling performance throughout.

There’s not a single performance in here which doesn’t deserve commendation. Duke’s Roderick Spode threatens to veer into pantomime villain territory on the odd laboured line, but then again he is embodied in the trappings of a nine-foot leather jacketed set piece so it’s hardly a character which doesn’t invite eventual ridicule. That’s precisely the base-level silliness which pervades the production, making for a delightfully madcap evening. 4/5

Jeeves and Wooster was shown from Friday 16th until Saturday 17th November as part of the Theatre by the Lake Season, York Theatre Royal. To find out more about the production, visit here…