It’s certainly a change to be made to feel like a show wasn’t made for me, a typical white middle class theatre-goer. A positive one. But this play doesn’t simply shine on diversity points. Lyrical, witty and sharp, ear for eye opens both senses to what black is in a society run by white folks. 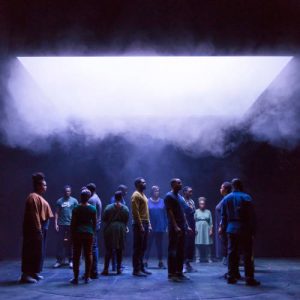 Whether it’s black-British or Afro-American, playwright Debbie Tucker Green pits the contradictions of the black experience off each other.

Black parents anxiously teach their sons how to engage, comport themselves, each gesture a potential problem for a white observer. Even a black boy who doesn’t speak will be “too loud” and he cannot look ashen faced to the floor either, “hell no, we didn’t raise you to look at no floor Son”.

There is the perpetual conflict of young and old, belligerent and intellectual too. Each exchange between a fiery youth trying to comprehend the injustice they face and a sagacious elder who has been shaped by it, repeated by British and American characters at different points of the show, explores this quandary, both with valid justifications.

A young man expresses his desire for change, not progress, for example:

Trying to convince him that reacting with anger won’t be the solution misses the point entirely:

I ain’t said I’ma solve shit like I’m a solution. I don’t look like a solution, I know that.

This aggression is not borne of ignorance nor a lack of understanding. Even in this conversation, he has to fight to be recognised as more than a concept.

Scenes are repeated with minor adjustments throughout the first part, characters without names share words and anecdotes, an emblem of what they have in common under a system of institutional racism.

That sense of community is popped by the entrance of the play’s only white man. The contrast is striking and violent as one of the rule setters, blind and deaf to the machinations that feed his privilege, sets the rules of the duologues that unfold.

We have a live human manifestation of the changing rules of specificity and broadness, changing in accordance with that which fits the point of this white academic purporting and believing himself to be abiding by truth, only coming to glimpse that it is only his truth he sees.

The epilogue is a final stroke of genius, as white Americans read Jim Crow laws and white Britons read the slave codes the British empire implemented in Jamaica. As we hear how a slave would have his ears cut off for having the audacity to run from his master, it’s hard to shrug it off with a “but that wasn’t me”.

Those were seeds of a racist system which continue to bloom today. While this play may not have been made for a white audience, it is even vital watching for one. 5/5

ear for eye was shown from Thursday 25th October until Saturday 24th November 2018 at the Royal Court Theatre. To find out more about the production, visit here…