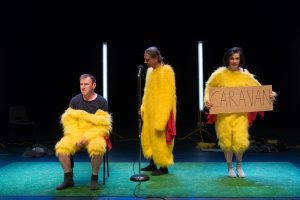 Real Magic presents a game show taking place on a fake lawn with a few lamps and plastic chairs arranged in a semicircle. The game show host, in an outrageous black wig, asks the blind-folded contestant, who is in his underwear, to guess the three words that the third performer, wearing a chicken costume, is thinking of.  As soon as the contestant fails, the three actors – Jerry Killick, Richard Lowdon and Claire Marshall – swap their roles. We witness an endless loop of failure and disappointment as the trio take turns thinking of a word (always the same ones), playing host or sitting in the hot seat. As the contestant struggles to find the answer, a clock sometimes ticks loudly like a time-bomb detonator and the laughter of a canned audience mocks the eventual failure.

The same scene is repeated over and over again, yet varying in gestures, facial expressions, speed and inflection. Occasionally, the flow of the scenes is interrupted by a dance, with all three performers donning garish yellow chicken costumes and hopping energetically round the stage.

This absurd show appears to follow Samuel Beckett’s dictum, “Fail Again. Fail better”,  as the contestant invariably loses every time. Even when the trio is trying to cheat, holding a cardboard with the word in front of the candidate, he is unable to change his established failure pattern.

Every scene invariably ends with the words: “You’re out. Let’s swap.”

The speed of the scene increases until the dialogue is reduced to just one or two words. Thereafter, the performers are so tired that they make mistakes and both the candidate and the third performer are holding cardboards with different words. The relationship between the performers changes throughout the production. Sometimes they are allies, at other times bitter enemies. The tone alternates between kindness and aggression, mockery and compassion. Yet their behaviour will not change the outcome. Nothing will, because the game is rigged against them.

The repetitiveness of the performance can be torture, several members of the audience leave before the end of the evening, but it is intriguing to watch the actors going through a range of emotions, from hopefulness to despair, trapped in a never ending game that is impossible to win. 4/5