Sunrise for the Blind @ The Tristan Bates Theatre Review

A chain-smoking, tracksuit-bottomed cast, a few bits of rubbish here and there, and searing dialogue: this play shows that this is all you need to conjure up a powerful depiction of the drudgery of life lived below the poverty line in a rough corner of Northern Manchester. 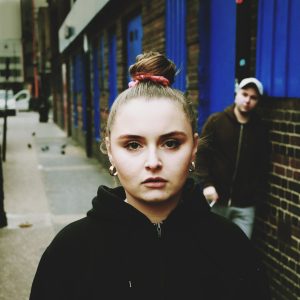 Penned by Lee Lomas, who also stars, Sunrise for the Blind is the perfect example of how little is required in terms of set and design and budget in order to put on a brilliant play – if the writing is good. And the writing is not just good but excellent. The script is pithy, pungent and whip-smart; it feels as though you’re overhearing real conversations rather than listening to something that has been carefully edited and rehearsed. But that’s a testament to the cast, too, who not only are all entirely convincing in their roles as gritty Northerners, but also at capturing a sense of hopelessness.

Mark (Michael Black) works in a corner shop run by an Indian family, and outside, a languid Nathan (Lomas) waits for his mate to come out for fag breaks. They banter about who’s shagging who while Nathan swoons over Ashley (Izzy Stevenson–Olds) who works in a pasty shop up the road. Meanwhile Becci (Alana Eaton), Ashley’s friend, needs a pregnancy test and as their lives become increasingly interconnected, the realities of hardship get deeper and the obstacles to escaping the mundanity become more pronounced.

It’s Ashley’s father and Becci’s mother who introduce the dimension of racism and prejudice into the equation, exposing ongoing issues that are particularly rife among small towns. Unlike the younger generation, both adults have no tolerance or sense of unity and this makes for uncomfortable but essential viewing.

There are aspects to the plot that feel a little far-fetched, and the storyline of Nas, the shop owners’ son, ought to have been introduced earlier on. The fact he has run away from home due to his oppressively religious father is suddenly dropped into conversation by his mother when the first half is culminating. Nas’s disappearance will have a significance on the rest of the characters’ lives, but this should be built up to so the audience doesn’t find themselves questioning ‘wait, who’s Nas?’.

Still, the play delivers sharp social commentary and doesn’t fail to entertain. Although there are plenty of great one-liners and some very funny moments, in general this is hard-hitting stuff. Mark articulates it best when he says: “it’s like being on a mudslide – every time you think you get a leg up you just slip back down into the shit.” Perhaps the more light that is shed on this very real mudslide, the less slippery it will become for those trying to climb it. In that way, Sunrise for the Blind might be a bleak play, but it is an important one. 4/5

Sunrise for the Blind is currently showing until Saturday 16th February 2019 at the Tristan Bates Theatre. To find out more about the production, visit here…