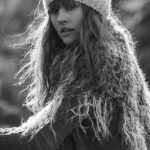 Currently on a UK tour, The Isle of Brimsker has captured the imaginations of many. A tale of a lone lighthouse keeper joined one day by a mysterious runaway, Frozen Light’s mission to create accessible work rings true. Having met in 2006 whilst studying the Applied Performance Masters course at the University of Kent, both Lucy Garland and Amber Onat Gregory created their very own form of multi-sensory theatre for audiences with profound and multiple learning difficulties (PMLD) and this would become the blueprint for their theatre practice today. Mid-tour, Lucy talked to us about how her time as a support worker has shaped her practice, creating the The Isle of Brimsker specifically for audiences with PMLD and what audiences can expect from the show.

Hi Lucy, Frozen Light’s The Isle of Brimsker is currently on tour. What have responses been towards the show so far?

Responses overall have been great.  This is a long tour taking in 36 venues on this leg, 15 venues in Autumn 2018 and a further 3 during the premiere tour in May /June 2018. We perform to audiences of 6 people with profound and multiple learning disabilities and their companions, and during this tour we have seen a huge range of reactions to our work.  Our audience keep us on our toes and demand the very best from us.

The Isle of Brimsker explores ‘friendship, isolation and how we react to change’. What was it about these themes that inspired Frozen Light to explore them?

As a company we are committed to making work for adults with profound and multiple learning disabilities. Having worked as a support worker for adults with learning disabilities for many years, I saw first-hand the decreasing opportunities to access to appropriate cultural activities the older a person gets. We wanted to meet this demand and create age appropriate contemporary theatre for audiences who are often excluded from accessing theatre in mainstream theatre venues.

The pivotal theme in this show was change.  Our audience are frequently young adults and they are often having to transition from education (a school they are likely to have been in since they were 4 years old) to adult services which are often much more poorly funded and less consistent than educational establishments.  Also, in the current climate our older adult audiences are more increasingly being moved from their homes/usual care provision due to cost saving exercises. We are always really interested in our productions following an emotional narrative and wanted to explore the theme of transition in a safe space and an accessible way relevant to the needs of our audience.

The show is multi-sensory, having specifically been created for audiences with profound and multiple learning disabilities (PMLD). How has the show been made accessible for these audiences?

Interestingly it is the multi-sensory that makes the show accessible for our audience.  People with profound and multiple learning disabilities access the world on a sensory level so for theatre to be meaningful to them it needs to take place in a sensory world. The multi-sensory is our main access tool for reaching our audience.  Each part of our story is underpinned with a sensory moment and these sensory moments are explored on a one to one level between performer and audience.  In The Isle of Brimsker these range from vibrating ropes, water dancing in a rockpool to grated ice and water sprayers during the storm.

The one to one interaction forms a conversation between the performer and our often, non-verbal audience member. As performers we listen (with all our senses) to what the person with PMLD needs from us in that moment, that may be touching a stone with their hand or holding it on their face or smelling it.  We are led by them and what they need from us to access the show in a way appropriate to their needs.

On top of the multi-sensory we also use signing (Makaton), live music and singing all of which create levels of access for our audience members. We see our shows as layers and try to provide something that everyone will gain from, so one person may not engage with the multi-sensory props but may be completely engaged with the music, another may not be aware of the narrative story but 100% involved with the sensory props.  Everything we do is an offer for our audience and designed to provide an engaging, accessible theatrical experience for them.

We provide each audience member with a visual story before the show.  This has pictures of the set, characters and explanations of what the audience can expect from the show.  This is a tool designed to reduce anxiety and give our audience an idea of what to expect before they arrive as for many of our audience this may be there first trip to the theatre.

When we made The Isle of Brimsker we flipped the usual theatrical process on its head.  Because the multi-sensory is key to reaching our audience we started with this. Over the course of our previous 3 shows we had seen the profound effect that music has on our audience.  We wanted to explore different ways our audience could access sound other than hearing it.  So, we played with props where you could feel the sound and see the sound.  Following on from this we worked from very early on in the process with our set designer to collaboratively come up with an environment where we could set all of these sensory explorations and The Isle of Brimsker was born.  Then having a map of sensory ideas and environment we devised characters and a story to sit on top of this.

The Isle of Brimsker premiered in 2018, have you made any adaptations to the show since?

The main change during this tour is that we are working with a new performer, Sophie Coward, in the role of Kaya.  In the premiere and Autumn 2018 tour Kaya was played by my co-artistic director Amber Onat Gregory. In all our previous shows it has always been me, Amber and our musician Al Watts as performers so this is the first time we have worked with someone new. This is a really exciting move forward for the company.  Amber is focusing on developing the company and fundraising with the aim of us being able to create more shows and reach more people with PMLD in the future.  We have really exciting plans for the future of the company and this is the first step on that journey.

Our audiences can expect to be immersed in a multi-sensory world of The Isle of Brimsker, an island in the midst of the North Sea.  Each audience member is sat in their own individual shimmer curtain shelter, which moves and can be used in whichever way the audience member decides. During the show they will experience all the island has to offer from the beauty and calmness of the island to the raging storms.  They will enter the lighthouse and discover an unusual friendship forged between two very different, very strong women.

I would like our audiences to feel valued in a world in which they are often excluded and ignored, I want them to leave having had a meaningful experience with a piece of theatre and the performers in it. I would like them to have found something in our show that they were able to engage with and which made theatre accessible to them.

I would like our audiences to take away the opportunity to access a piece of theatre in their local community.  The majority of our audience would find it incredibly difficult to access mainstream theatre and for it to be relevant for them.  We want to fill that gap, we want them to be able to access entertainment that meets their needs.

The Isle of Brimsker will next show at The Studio Theatre – Edinburgh on Thursday 28th February 2019 and is currently on tour. To find out more about the production, visit here…