We all know that our forefathers and their forefathers before have been in a constant game of revenge since the first two men on earth took vengeance on each other to defend their own beliefs. Fathers at war with themselves and others is what has driven countries and communities apart for far too long. 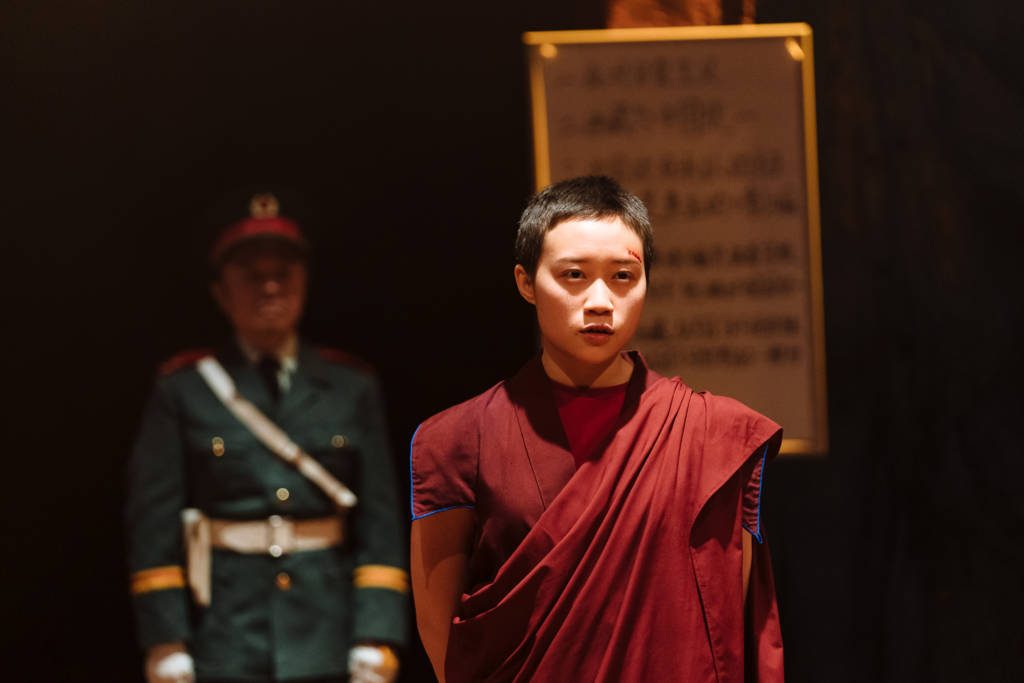 Fatherhood, feminism and cultural beliefs brutally clash and intertwine in Abhishek Majumdar’s fiery Pah-La at the Royal Court. Based on real stories of the Tibetan unrest of 2008, Pah-La discusses the causes of the tension, the bitterness of the retribution and the unyielding power of religious and political power structures.

Tibetan nun, Deshar (Millicent Wong) has a boldly resistant view of how things should be. Not one to be pushed around by the Chinese authorities, Deshar performs the ultimate political protest of self-immolation to make her voice heard. In doing so, she sparks a mountainous chorus of violent debate that is felt all across China.

Wong carries the intensity of this script with composure and maturity. The pain of Deshar’s self-sacrifice is unimaginably weighty and takes an exhaustive toll on Wong’s physical body- but she never drops that suffering, not for one second. It’s hard to believe that this breath taking actor is making her UK stage debut.

Movement direction from Quang Kien Van comes into its own most spectacularly during scene six where the nuns of the monastery are forced into learning the five major pillars of re-education. Their voices cry as their bodies collapse in prayer, more from exhaustion than benediction. But the relentless government official Deng (Daniel York Loh) will stop at nothing, torture is merely a game for him.

It seems that Majumdar takes the craft of playwriting and adds an extra dose of adrenaline for good measure. This compliments well to Debbie Hannan’s direction which is precise and measured but with flares of rage that suddenly scorch, emphasising the rising heat of the political unrest. It’s a heavy piece, certainly not one for the faint-hearted or for those who easily suffer from hot flushes- a roaring pyrotechnic scene frames the closing of act one magnificently.

Majumdar wields a dutiful dedication to his work- he risked it all to travel to Lhasa to write this play detailing the contentious issues of China’s oppression of Tibet. It’s a prickly subject area that caused many hiccups on its way to the Royal Court. But his research has paid off, the brutality of his character’s dialogue is poetic yet cruelly stark. 12 year old Puma (Zachary Hing) speaks the line ‘I think we hate that which we do not understand’ with an air of such openness that it is chilling to comprehend the suffering that so many young people have experienced due to the ongoing conflict. 4/5

Pah-La is currently showing until Saturday 27th April 2019 at the Royal Court Theatre. To find out more about the production, visit here…

« Previous post
The Believers Are But Brothers @ Stratford Circus Arts Centre Review
Next post »
Co-Founders of the Network of Independent Critics Laura Kressly and Katharine Kavanagh talk about the initiative’s 4th year!