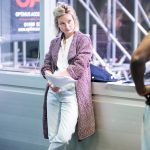 Hi Laura, The Dot Collective’s show One Hundred Trillion will play at the Old Vic Workrooms from the 7th to 11th May. How are you feeling ahead of the run?

Can’t quite believe it’s May and we got here! I’m excited, a little overwhelmed but excited and confident. These plays were created with such a loving, caring supportive group of people (who happen to live with dementia) and I channel them when times get tough during production. I also have an incredible creative team behind me, backing me all the way. So all in all I’m feeling pretty lucky.

One Hundred Trillion refers to the number of synapses that form memories in the human brain. The show will explore themes of memory and experience. What inspired you to create the piece?

I wanted to avoid patronising an audience in care. I didn’t want to be a company that provides tired theatre assuming that that’s what our audience want. I have no issues in producing theatre classics, they work so well – but let’s make them fresh, fun and lively – inject life through theatre into residential homes. So we would go into a care home dining room, pick up the peas that had fallen on the floor 30 mins before during dinner and get in our lighting rig, set and PA system and transform the space with all the aesthetics of a theatre. I also wanted to create new, exciting new writing that an audience with dementia can relate to – so we listened to them, their stories, and created plays with their wealth of experience and characters at the core of the work.

The show will be an immersive experience, witnessing plays playing out in 4 different rooms. How have The Dot Collective approached creating the show?

The plays were created with four dementia peer groups in Southwark and Lambeth through a series of storytelling workshops. We paired four playwrights with each group and after a month of workshops the playwrights wrote plays inspired by the dementia groups. As an experience at the Old Vic Workrooms, we see the whole place as the ‘synapse hotel’. The world you enter is that, and each play is a room off of the corridors of the hotel. This is no ordinary hotel, it’s a bit derelict, broken down, some pathways closed and diversions but blimey the people who run the hotel are exciting – and lead you on a journey of life, loss, love memory, hope.

We held four workshops with each group. They were really relaxed and we talked a lot and had a load of fun. We discussed occupations – what was your occupation? And if you could choose any occupation, what would you be? So we had nuggets of facts, and fiction, memory and imagination, which gave us material to work with. We talked about holidays, names and places and created poetry, danced and sung to music together. All of this would inform us about the people we were working with, we found out about them, their interests, common themes within the group – and we’d build each workshop around what we learnt from them, so it grew organically.

Workshops will also take place alongside this year’s performances with dementia groups. What will these workshops entail?

The groups will come along to the experience at the Old Vic Workrooms and interact with the set. We will run activities: in the memory room they will write poems together that will be added to the walls in the room, in the garden we’ll make up flower beds, in the 70s living room we’ll dance to Elvis together and in the bus garage we’ll create our own journey. Groups will add to the set and keep it growing!

The Dot Collective’s aim is to raise awareness on dementia, reshape perception and to create positive emotional memories for workshop participants. From the workshops last year up until now, is there anything new that you have learned about dementia?

I learn all the time from meeting the people who live and care with dementia. Over the last year I’ve learnt a lot from the groups and the volunteers and staff who run them as well about how to socially engage, beyond talking about the weather. Being patient, talking as you would to a friend but just take time, allow the time for response. And if the response doesn’t come, that’s okay.

An entirely unique experience. Four totally different worlds of play. To be moved, to laugh, to sing, to dance and to walk away with a sense of joy.

What would you like for audiences and workshop participants to take away from the show?

An hour of meaningful, joyful social engagement and a lasting positive emotional memory.

One Hundred Trillion is currently showing at the Old Vic Workrooms until Saturday 11th May 2019. To find out more about the production, visit here…