The Hunt @ The Almeida Theatre Review

This stage adaptation of Thomas Vinterberg’s 2012 film The Hunt (Jagten) explores the false accusation of Lucas (played by Tobias Menzies) for sexual assault and paedophilia. Lucas, a schoolteacher is falsely accused by one of his pupils, Clara (played by Abbiegail Mills). As other children then come forward with more accusations, ambiguity settles in regarding Lucas’s conduct. 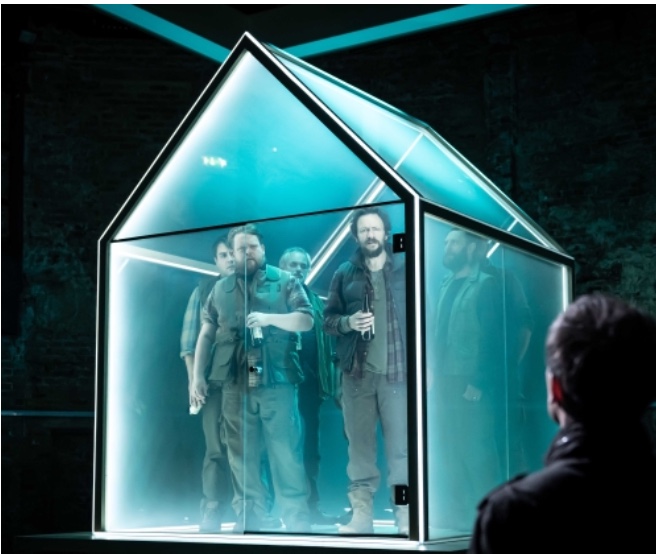 Evidence seems to prove he is innocent, but Lucas’s manner and speech suggest otherwise. When his son, Marcus (played by Stuart Campbell) tells him the police have questioned him, Lucas hesitates. He does not claim innocence, and simply asks ‘What did you tell them?’ leaving the audience to wonder if there is indeed something Marcus should not tell the police.

The show presents itself as a highly accomplished and well-polished piece. Tobias Menzies’ performance is disturbing and keeps the ambiguity alive. Clara’s parents played by Poppy Miller and Justin Salinger are very compelling and reel the audience into their familial drama with empathy. The design by Es Devlin is clever and adds to the polished feel of the piece: a small wooden Ikea-style house, set a top a revolving platform. The Costumes by Evie Gurney contrast well with this sleek exterior, the men wear hunting gear and the women warm sweaters that give the feel of a cold Nordic winter.

There are interesting undercurrents to this production. One is the sense of sacred ritual tied into the community and more interesting still is the toxic masculinity displayed by the predominately male cast. Testosterone fuelled scenes appear and reappear throughout the play.These scenes display ritualistic drinking and initiations, which suggest that there is something rotten bubbling under the surface of this community where men must be men. It is an interesting point but it always seems to be lurking in the background of the horribleness stirring at the forefront.

A false accusation of sexual assault is horrible and is a topic worth exploring. Despite the fact this play has no apparent flaws, I cannot feel anything for this piece other than its questionable timing in our current socio-political climate. It seems that while some theatres take steps towards more equality, others take steps back and we are left doing an awkward to and fro, going nowhere fast. This play is definitely a step back.

This play puts the accused centre stage, surround him predominately with men (who are oozing testosterone out of every pore) and leave the survivors of sexual assault in the shadows. If I’m watching a play about sexual assault, I feel that it is time, or as others have said before me, past time, to listen to the voices that have been silenced for too long. During this performance I sit surrounded by older white men who audibly sigh in compassion for Lucas’s plight. All I feel is alienated and I doubt I’d be the only woman to feel this. I don’t think this is the intention in choosing to stage this play, but I do think it is insensitive and badly timed.

The Hunt is currently showing until Saturday 3rd August 2019 at the Almeida Theatre. To find out more about the production, visit here…