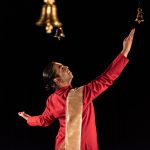 Introduced in 1861 under colonial rule, Section 377 would include the criminalisation of same sex relationships, an unjust action that would impact on the lives of many. However, on the 6th September, 2018, the Supreme Court of India would rule this inclusion as ‘unconstitutional’ and would therefore witness its decriminalisation. We’re at the forefront of a new decade, and with this, we are witnessing global shifts against certain conservative attitudes, and this is significant. LGBTQ+ stories are starting to be discussed openly, laws slowly being overturned and human rights being exercised. Choreographer and Theatre Maker Jaivant Patel explores this era of change we’re living in in his debut piece ‘YAATRA’ – a fusion of Kathak and Contemporary dance exploring LGBTQ+ narratives, faith and spirituality. Ahead of its showing at TARA Arts Theatre on Thursday 17th October, Jaivant tells us more his choreographic and musical process, exploring personal aspects of his identity and what audiences can expect from the show!

Hi Jaivant, your show YAATRA will show at Tara Arts in mid October and will go on tour until late November. How are you feeling ahead of the show?

I am very excited to be premiering YAATRA at Tara Arts after having had previewed the show at Kala Sangam and Blue Elephant Theatre. Tara Arts and its artistic director Jatinder Verma have a long history in the development and innovation of British Asian Arts, to premiere YAATRA there is an immense honour. I am especially looking forward to performing on the clay earth floor stage that’s unique for a UK performance stage.

YAATRA ‘offers an exciting new perspective on South Asian LGBTQ+ narratives, faith and spirituality’. What inspired you to explore these particular themes?

A realisation that alternate voices from the LGBTQ+ community needed to diversify work in the form of dance. South Asian LGBTQ+ voices are rarely exposed and often marginalised and I wanted YAATRA to contribute towards a change for this to happen.

Whenever I look at existing and current work in dance in the UK and most international scenes, I rarely see myself as a gay Indian man being represented or pieces that are reflective of the narratives, themes and issues that are important to me. YAATRA is about empowering representation and encouraging others do similar work if they have a desire to do so.

This production also sees my coming back into performing after taking some time out to concentrate on other areas of my professional development. YAATRA is also my first full; length solo production; something I have been wanting to do for a while and now feel as a mature artist, is the appropriate time to do.

The show fuses the Indian classical dance form of Kathak and contemporary dance. How did you approach choreographing the piece?

I much prefer referring to it as a blending of styles and dance forms, which is reflective of where I am currently in my creative practice. I trained as a contemporary dancer and started incorporating kathak technique into my practice around 4 years ago under the guidance of Nahid Siddiqui, who is a renowned global exponent in Kathak.

I am fascinated by the forms, principles, aesthetics and Indian classical dance and my ambition is to create an idiosyncratic language and vocabulary reflective of me. At the moment I am still very much a student of Kathak and so the production is a meeting point of Kathak and contemporary dance.

I was very fortunate to have worked so closely with Nahidji, my guide in Kathak as a choreographic collaborator for the first part of the evening which is ‘Awakening‘. She was instrumental in my understanding the foundation of the form. Her using the purity of the form to choreograph in a contemporary context helped me to approach self-choreographing the second piece of the evening also entitled ‘Yaatra‘. I must also mention Urja Desai Thakore who was a choreographic mentor, for ‘Yaatra‘ along with Ben Wright and Shane Shambhu. Urja is a UK based choreographer and Kathak artist who has created classical pieces in contemporary contexts and as a fellow peer and mentor was able to explore with me what that meant in relation to the multi-layers narratives I was exploring in the evening as a whole.

Music plays a crucial role in the production and sees you collaborate with composer Hassan Mohyeddin and Poetry/Spoken Word Artist Ali Harwood. How have you collaborated with both to develop the show’s musical aspect?

When ‘Awakening‘ was being developed Nahid Siddiqui had asked her long-term collaborator and son Hassan Mohyeddin to compose the music in a classical Indian style. During the process it just made sense for Hassan to carry those themes across into creating contemporary music for ‘Yaatra‘ as he had started the journey with me. In both instances he responded creatively from seeing footage of both the pieces and exploring the emotional journey of the works. The music has developed alot since the research phase is 2017 and is in a place which compliments and accompanies the moment and choreographic structure of the work in a beautiful way.

My collaboration with Ali was accidental. I invited him into the studio space during the research phase in 2017 and found a beautiful response in his poetry to what I was exploring physically. We then mutually decided to expand and see how spoken work could work in the choreographic structure of the second piece of the evening ‘Yaatra‘. Initially we used Ali’s voice for the research sharings, however in the full production development we recorded my own voice and also incorporated unused stanzas in the beginning of ‘Awakening‘ for a continuity of theme and contribution to the multi-layers within the whole evening.

I approach collaboration with as much of an open mind as possible. I see it as a meeting of two creative pools of experience in which you will find a crossover of similar thinking. That is where the magic happens for me. I have been incredibly fortunate that all my creative collaborators for YAATRA have been of similar thinking and thought process when developing the production and so it has been an enriching experience for me as an artist.

A personal piece exploring heritage, sexuality, faith and spirituality, how have you found the experience of creating the show?

YAATRA is my first full length production and in terms of comparison to other pieces, this work is influenced by my own experiences as an open Indian homosexual man with faith.

YAATRA started by asking a simple question that was ‘What does dance look like through the disruptive perspective of the South Asian queer lens’. For me it is a great starting point through which I am exploring the rich possibilities rooted in South Asian LGBTQ+ narratives.

YAATRA has drawn on my personal history and weaved a narrative reflective of my identity that also is universal in presentation to be accessible to all regardless of your experience or knowledge of dance.

YAATRA is also the first touring production of it’s kind in the UK to explore South Asian LGBTQ+ narratives in dance. Coincidently, Section 377 in India has just celebrated it’s first year of abolishment and YAATRA comes at a time where India’s diaspora are now beginning (after a long time) to see effect of change and attitudes from their motherland and country of origin.

I have found the experience enriching in the understanding of who I am as an artist and what my future begins to look like creatively in achieving my own artistic goals and ambitions. I too have now felt a greater sense of responsibility in contributing to platforming and creating space for alternative, under-represented and under-exposed narratives by bringing them to the forefront to truly represent the multi-cultural communities we live and are surrounded by globally.

Importantly for me identifying as a British Indian, YAATRA celebrates two cultures and the intersectionality of living in one, while paying tribute to traditions, heritage and often untold stories of another.

The piece is also heavily influenced by my grandma and my personal reflection of growing up around her and seeing her practice her faith. The entire production features her voice speaking in Gujarati (my mother tongue), singing hymns and reciting Sanskrit Scriptures.

I am hoping all who watch are able to connect on a universal level with the content of YAATRA.

I am also hopeful those with a proactive in any faith will be able to connect with themes such as spirituality in the piece when coming to see it.

In YAATRA I also hope that existing perceptions of work created around wider LGBTQ+ narratives are subverted and there isn’t a burden or pressure to continually create work in the context that is popularist, formulaic to a degree, out, loud and proud. We can create work that is out, loud and proud too in other ways.

That all said, if you simply want to have an evening of good music and dance then this is the show for you.

Key message of acceptance and the desire for the subject matter to open up questions of the role of LGBTQ+ narratives in the South Asian community and wider communities. With South Asian, these narratives for example have existed for centuries in the mythology of India and the sub-continent; they seemed to have been wiped out in the conditioning of the colonial mind of which the South Asian diaspora belong too. The legacy of colonisation for example in laws such as Section 377 existed up until last year prior to abolishment. I felt a responsibility as a member of the wider LGBTQ+ community to bring these narratives to the forefront as it is incredibly important for the South Asian community to own these stories and wider dialogues it brings. I would love people of all backgrounds to discuss the piece in whatever way it has touched them.

I also believe a man who identifies as being LGBTQ+ can also have faith and spirituality. By exploring and presenting ideas around this I hope YAATRA successfully and positively challenges a stereotypical viewpoint that homosexuality and faith don’t belong together.

During the early stages of the production, I was invited to talk about the subject of homosexuality and faith in the context of YAATRA by Sean Richardson. This conversation now forms part of a dedicated chapter in a recently published book entitled ‘Unorthodox, LGBT+ Identity and Faith’.

What advice would you give to aspiring choreographers and theatre makers?

YAATRA will show from Thursday 17th October 2019 at the Tara Arts Theatre before going on tour. To find out more about the production, visit here…

« Previous post
Orpheus and Eurydice @ The English National Opera Review
Next post »
Playwright Sharon Byrne talks about her show ‘Gutted’ showing at The Marlowe Theatre and The Irish Cultural Centre!