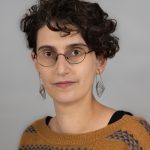 Divisions within our society have become extremely apparent post the EU Referendum, unearthing tensions that have seemed to have simmered for decades. In a time whereby the rise of technology has helped bring people together, rhetoric from powerful figures sadly work against this, their encouragement of building borders and placing blame elsewhere a worrying trend. Exploring the idea of ‘borders’ both physically and mentally, playwright Afsaneh Gray presents ‘The Border’; a collaborative piece created alongside young people in Croydon and Bedworth and dramaturg Sarah Dickerson. Mid tour, having already visited Redbridge Drama Centre, Wanstead Festival, The Northwall Arts Centre and Theatre Peckham, Afsaneh tells us more about the show!

Hi Afsaneh, your show The Border is currently on tour, and will show at The Edge Theatre and Arts Centre and Sunderland Library. How are you feeling midway through the tour?

Great, but then I’ve not been touring! I think it’s a pretty gruelling schedule, but the cast seem to be taking it all in their stride like proper troopers.

The Border “questions the meaning of borders and the lines we draw between ourselves and other people”. What inspired you to explore this topical issue further?

It seems to me that young people are growing up into a very different kind of world than I did. There’s a spirit of retraction in the air. Both in terms of physical boundaries, and also the way we define ourselves. It’s much more ‘us versus them’. People are being forced to take a side, so I guess I wanted to take a moment with this play to think about how we listen to each other, how we avoid collapsing into simplicity and keep hold of nuance.

The show was developed in collaboration with young people in Croydon and Bedworth and dramaturg Sarah Dickerson. What was the process in terms of creating the final piece?

Writing a play is always a collaborative process. Sarah (and Natalie, artistic director of Theatre Centre and the director of this piece) was involved from the beginning, in terms of discussing my ideas and helping me refine them. Then I went through several drafts and a couple of workshops with young people. That was incredibly helpful, because I could get a sense of how the play was sitting with its intended audience – what questions they had, what was landing, what wasn’t. What they were interested in seeing, as well. Then back to my room, to redraft, and back to Sarah and Natalie, who always had words of wisdom. In the end, I wrote pretty much what I said I was going to write at the beginning of this process, but of course I took the long route, and that’s probably the best, if not only, route to take! And plenty of people guided me along it…

Absolutely! Each time I’ve seen it, I’ve learnt directly from the audience because people always say such thought-provoking things during the debate that I’ve had to question myself and my own assumptions. Also, it’s interesting because it’s aimed at ages 13 to 18, so it’s fascinating seeing how different age groups react. They definitely laugh at different jokes!

A good yarn about a girl and her dog, fast-paced dialogue, jokes, songs, a seriously great cast, hopefully some interesting provocations, and a chance to give their own views about things.

A sense that they can talk to each other afterwards even if they disagree.

Read plays. See plays when you get the chance/can afford it (there are various discount schemes for young people, but also if there’s something you really want to see and can’t because money’s a barrier, reach out to the creative team). Start writing, keep writing. Get a job to pay the bills, because writing won’t (at least not for a long time). Put your stuff out there. Hear the criticism but also the praise. Know that everyone (and I mean everyone) gets more rejections than acceptances. Ask for help and advice, but only take it if it’s actually helpful for you at that time.

The Border will show at The Edge Theatre and Arts Centre on Thursday 31st October and at the Sunderland Library on Wednesday 6th November 2019. To find out more, visit here…