One @ The Battersea Arts Centre Review

A show about trust, intimacy and vulnerability presented through an overtly playful and ironic questioning of performance and the relationship between audience and performer, I think. 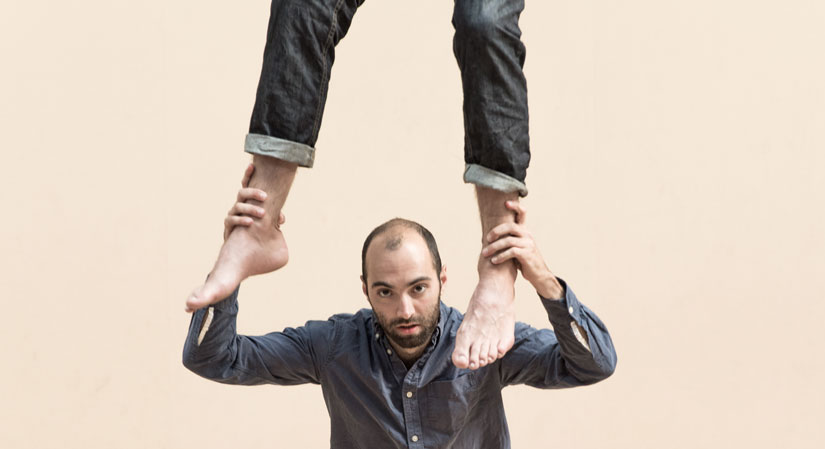 A show so utterly absurd and yet viscerally touching that I don’t really know what I am meant to write here. The show, if that’s the right word, opens with Bert (Bertrand Lesca), asking Nasi (Nasi Voutsas) to come down from the ladder, then asking the audience to ask the same thing. What follows appears to explore a tense and broken relationship between two people who essentially love each other, expressed in the most violent, vulnerable and unsettling deconstruction of the human condition.

Picking straight up from their two pieces Eurohouse, and Palmyra, which are more obviously political, however this is just as contemporary and concerningly relevant, given Bert and Nasi timidly yet aggressively questioning how we communicate and relate to each other in an increasingly alien and often polarised world.

Despite appearing a trivial argument, the show cuts harrowingly deep as the two clowns argue and fight in a terrifying spiral out of control, as Bert kicks the ladder, Nasi stands atop, both beg for help and Nasi gets stuck in a form of grotesque self-harm. All while both Bert and Nasi dance around the terrifying proposition that everything is not ok.

The brilliance of this exposing game comes in the masterful toying with trust between the audience and performers. Both give the sense that the audience is driving the show, but their shared instability creates the tension and fear that anything could happen next. We want to care for these characters but Bert and Nasi deliberately let this grow only to shock the audience by lashing out and leaving paralysing, unavoidable silences.

One takes us to task in what role we play in their suffering and whether we have facilitated the pain they display on stage. While Bert hits himself increasingly violently, he asks the audience to ask Nasi to stop, a ridiculous routine but painful to watch in its consideration of where responsibility for suffering lies, which again links this back to the political angle of whether we become guilty because of inaction.

But essentially the beauty of this show is that it is whatever you want it to be and what conclusions are made about this may well reflect more about your own state of mind than where Bert and Nasi are coming from. 5/5

One is currently showing until Saturday 19th October 2019 at the Battersea Arts Centre. To find out more about the production, visit here…