The term ‘intersectionality’ – coined in 1989 by feminist scholar Kimberlé Williams refers to the ‘cumulative way in which the effects of multiple forms of discrimination (such as racism, sexism and classism) combine, overlap or intersect especially in the experiences of marginalized individuals or groups (Merriam- Webster). A term we find ourselves increasingly familiar with; a greater awareness is being brought towards the inequalities faced by particular communities. 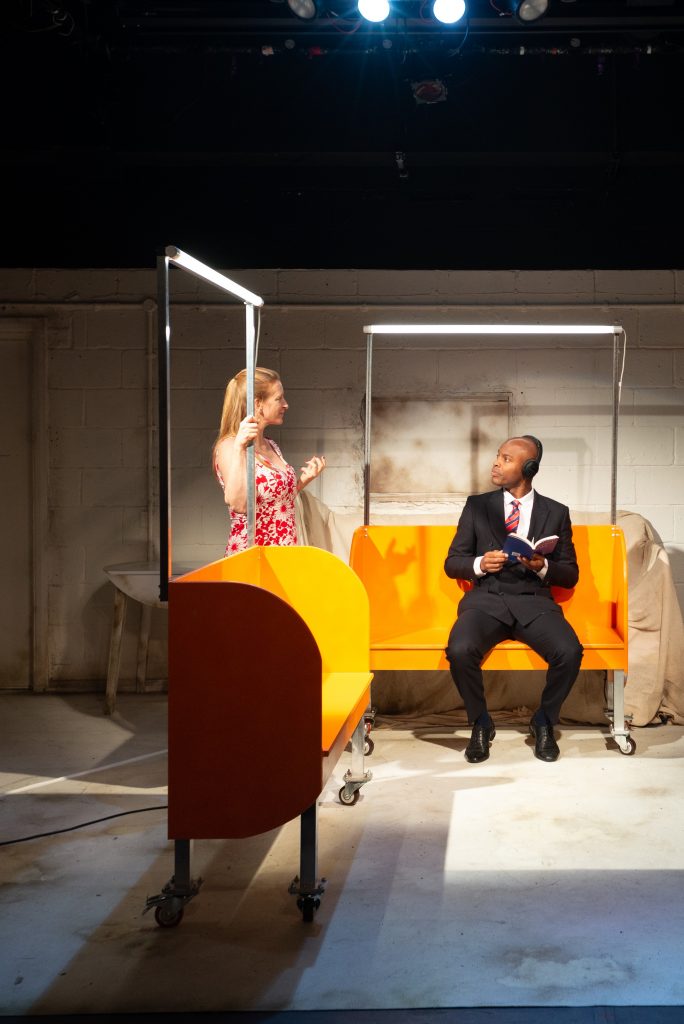 Observed in Civil Rights Activst Amiri Baraka’s Dutchman, daily interactions are placed under the microscope as we are transported to early 1960s New York. Situated in a carriage of a subway train, James Barnes’ Clay and Cheska Hill – Wood’s Lula play out the complexities of a societal system in support of Lula’s privilege. As onlookers pass by, an evening unfolds uncomfortable, ugly truths.

Baraka’s holding up of a mirror to America’s sinister unequal underbelly shocks, derogatory racial slurs flippantly uttered by an unconcerned, oblivious Lula a stark reminder of how dehumanising experiences like this are. Written and initially performed mid Civil Rights Movement, I can only imagine the responses of those watching this decades ago, audible gasps as I watch today signalling our attitudes towards what we’re hearing as unjust. Baraka pinpoints intersectionality here, Clay viewed as ‘other’, a sexual being not deserving of the same rights as Lula, a man expected to tolerate the nonchalant abuse thrown his way.

Director Kaitlin Argeaux begins to encapsulate the complexity of intersectionality and this makes for an intriguing watch. Barnes displays Clay’s charming and easy going nature, contrasted with Lula’s outspoken carefree disposition. When the tables turn however and Clay can no longer tolerate another moment of Lula’s ignorance, his anger signals a point in which the play’s tone should change, however this lacks the intensity needed to fully realise this.

The evening brings up uncomfortable truths, truths we still find ourselves witnessing today, and that’s concerning. A political piece of theatre delivered satirically, Dutchman shows us that conversations boldly addressing these inequalities are paramount for society moving forward – observations like this crucial to showing these daily interactions and how they play out. 3.5/5

Dutchman is currently showing until Saturday 26th October 2019 at the Tristan Bates Theatre. To find out more about the production, visit here…