A story which needs telling and compelling in its unique way, Five Years is almost the powerful monologue it could be. While it may allude to some prevalent themes, Five Years leaves a lot untouched where it may have benefit from some fleshing out. 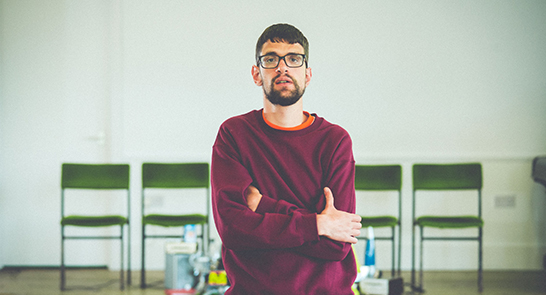 Neal Pike maintains an honesty and intimacy throughout the performance, and while this is mostly used to great effect, allowing us to closely observe the narrative progression, it appears occasionally underdeveloped. Pike essentially tells us the story of being bullied throughout his time at Foxwood School and there are some compelling moments of vulnerability as he struggles with self-confidence and social transitions.

Powerful at times, Five Years never quite gets into gear, leaving you with a strong connection to raw moments within the show, but not much else. Unfortunately, it feels as though Pike and Matt Miller are not able to find a rhythm for the narrative, letting down some of the stronger moments of poetic dialogue as the minutes between are in danger of becoming filler.

Honesty is the strength of the performance; unpretentious and self-aware, Pike does not mince his words. There is a real strength to parts of this play, with some beautiful lines. However, where this show falls down is in its inconsistency. Pike fails to maintain the quality of some of its high points, resulting in a badly paced story which places emphasis in illogical places.

Underneath this however is a simple story which shows and does not tell, using less is more to great effect. Framed with the aesthetic of a group counselling session, Pike gives time for the show to breathe and while the transitions are occasionally a little clunky, this allows for themes to develop and leave room for the audience to think.

Overall, it is important that plays like this are staged, and while the performance itself leaves something to be desired, Pike and Miller’s strong theatrical voices are brought to the fore by a promising script. 2/5

Five years was shown on Friday 15th and Saturday 16th November at the Camden People’s Theatre. The show is also currently on tour, and will show at the Theatre Shop on Thursday 21st November, Exeter Phoenix on Saturday 23rd November and Arena Theatre Wolverhampton on Tuesday 3rd December 2019.

« Previous post
Win a pair of tickets to Gurpreet Kaur Bhatti’s ‘A Kind of People’ showing at the Royal Court!
Next post »
Reasons to Stay Alive @ The York Theatre Royal Review