Within the arts, as well as on a larger scale, we’re beginning to witness conversations on representation and race take centre stage – addressing the fact that for far too long, many stories reflective of our day to day lives have been marginalised and even prevented from making it onto our main stages. An advocate of East Asian stories taking centre stage, playwright Daniel York Loh presents Invisible Harmony, a part spoken word/part dance piece/part film dismantling the many myths we’ve built up here in the West about the East  brining untold stories to the fore. 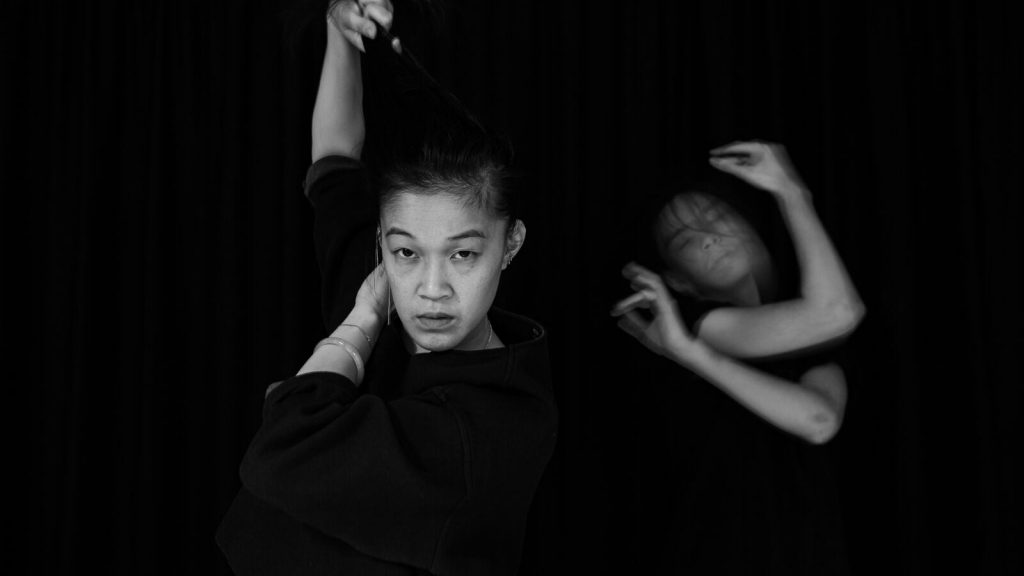 Invisible Harmony offers a labirythine take on two performers’ East Asian heritage, poet and performers Julia Cheng and Enxi Chang presenting an eclectic 60mins of thought provoking drama – ideas presenting themselves as quickly as the speed of media outlets – a reflection on how our very own media often present stories from their own perspective, at speed, ignoring the culture reported and its many intricacies, all to portray a particular narrative that best suits them.

The piece is protest, bringing perspectives to the fore often suppressed. Drawing on censorship, oppression and politics, Invisible Harmony fights for the many voices that do not have the luxury of speaking their truth – a still of a masked couple pulled apart due to rising tensions and societal issues a stand out moment, a moment of heart depicting a basic human right being taken away. Tianamen Square is also mentioned, the iconic image of a man standing in front of a line of tanks in 1989 – Cheng referencing the smallness of the TV set in which she witnesses the events yet the event’s monumental historical grounding – a powerful line, words spoken a very important strand of the evening.

Invisible Harmony’s structure comprises of original songs and spoken word pieces; these connecting both performers to their cultural heritage via mother tongue, allowing for a freedom of expression and for the eclectic structure to take effect. Imagery of soldiers, Beijing Opera performers, Tianamen Square, bubble tea, martial arts amongst others depict the limited view in which the West view East Asia, the show satirical yet straight forward in its intentions to educate audiences on their biases and begin the conversation to start dismantling stereotypes.

The evening has a carefree feel to it; although the show has been crafted and performances have been rehearsed prior, there’s an organic-ness that feels as if both performers are speaking to the audience from the heart, on the spot and that’s very inviting – creating a chilled atmosphere. An authentic, eclectic piece of political theatre, Invisible Harmony connects with both East Asia and the diaspora to open up perspectives.

Invisible Harmony was shown on Tuesday 4th February 2020 at the Southbank Centre. To find out more about the production, visit here…