A cutting shrine to an England that never existed, Death of England, examines tormented, terrified masculinity in the wake of a father’s death. Clint Dyer and Roy Williams (Co-Writers) do an excellent job in using this timely confession to muddy the waters of an increasingly polarised world. 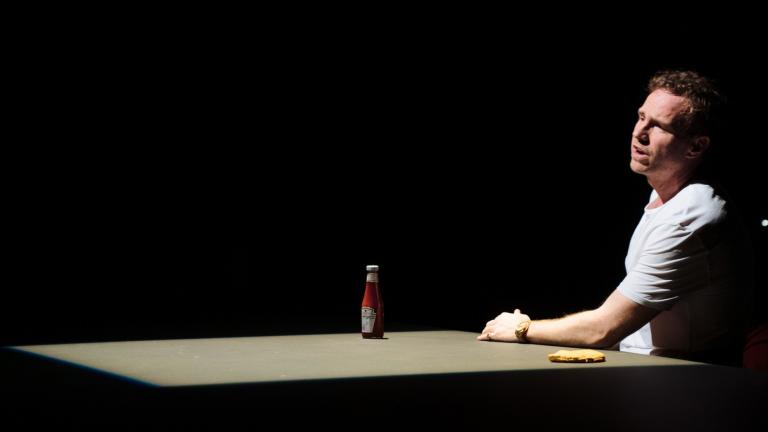 Michael’s (Rafe Spall) dad has died, in the midst of a rampage of racism and xenophobia and the legacy of a man who ruined much of his life, tears him apart. Michael blunders through this show, a man deeply conflicted, and made more intense by the excruciating humour. His father’s death symbolic of the death of so-called ‘old England’, through his family fall-out and alienation from those he loves we see him descend into a breakdown, only to rise again and ask what is left.

The one-performer confessional dialogue suits this show well. By acknowledging its one-sidedness, it allows for an often humorous but vulnerable exploration of where hate comes from and the effects it has. Rooted in contemporary politics, Dyer and Williams do a good job in breaking down barriers to dispel misconceptions and find universal questions. They then proceed to demonstrate, through brilliant callbacks and sharp dialogue, how these universal questions can be the root of our division.

The stage is a giant red cross, cleverly acting as both an English flag as well as a crucifix; the platform for a reckoning of masculinity and so-called ‘Britishness’. This theme is relentless, Michael attempts to create a shrine to an England that never existed, and in doing this both the audience and performer are encouraged to reconsider what that means and how we move on from here. Props and lighting are used with diligent creativity, we are never given an answer, more of a sense and then stimulated to think beyond the happenings of the stage.

Spall is a tour de force, masterful crowd work and true vulnerability work brilliantly, complimenting each other; making you laugh and then feel terrible for laughing and the fact that we are never truly allowed to love him accentuates this. Physical comedy and a nervy stage fright play with the audience, meaning that when rare moments of stillness do come about, all the bravado is reduced to a boy who misses his dad as we are reduced to tears.

Everything around Michael has gone, whether he pushed it, or it had to go, it is gone. Dyer and Williams ask what is next, a question asked by millions every day, and there are glimmers of hope scattered amongst the bleakness. 4/5

Death of England is currently showing until Saturday 7th March 2020 at the National Theatre. To find out more about the production, visit here…