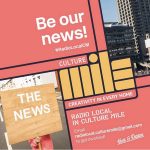 Culture Mile, the City of London’s cultural district stretching from Farringdon to Moorgate will go hyper-local during the lockdown with Radio Local – a daily live broadcast, bringing the sounds and stories of the City, into people’s homes and broadcast to the world.

Radio Local, created by performance artists Hunt & Darton, will be an hour-long show every day from 1 – 2pm, Sat 30 May – Fri 12 June. It will be built with, by and for the City’s residents, workers and local businesses. The show will be streamed live here and here, on Resonance Extra (DAB), with a daily repeat show on Resonance 104.4FM at 10am. It will also go out live on community radio East London Radio and Barts Hospital Radio.

With Hunt & Darton’s signature deadpan, playful and inclusive approach, the daily broadcasts will celebrate everything from the charmingly mundane to the quite extraordinary. The line-up will include interviews with residents and businesses within Culture Mile, including local legends Barbican resident LSO violinist Maxine Kwok and accountant-turned artisan baker Matthew Rideout, who has been delivering daily loaves to NHS staff. Guest commissions come from artists Scottee, Victoria Melody and guest presenters Bourgeois and Maurice.

The shows will feature absurd gameshows, hyper-local news bulletins from the estate, where local residents can divulge anything from home DIY successes to births and restaurant reviews – sampling the best of the new takeaway scene. Other regular items include The Family – looking at lockdown life with five local families, an agony aunt segment, where strangers share their problems in a kind, supportive environment and a home-grown soap opera.

While Hunt & Darton would usually trawl the streets looking for local legends and the burning issues of the day, the duo has moved the hunt for stories online, using digital forums and social media as well as offline resident networks.

In the last few years, budget cuts and an ever-increasing centralisation of the media have led to a devastating demise in support for local radio, with tens of local shows closing their networks earlier this year. However, since the global pandemic took hold, listeners have turned to local radio in huge numbers, with many stations reporting record listening figures as a result. At a time when so many people are searching for entertainment and reassurance, Hunt & Darton’s hyper local approach highlights the role of local radio in the community, bringing people together and connecting them.

Hunt & Darton is a 10-year old collaborative practice between artists Jenny Hunt and Holly Darton, who both studied Fine Art at Central Saint Martins. Hunt & Darton make work that embraces the ordinary as extraordinary; they replicate, borrow, reframe and reclaim social space, facilitating ambitious Public Art that responsibly establishes itself as part of its new home. The award-winning Hunt & Darton Café, a pop-up interactive performance  and fully-functioning café toured to the Barbican’s Level G in 2019 during the Barbican Art Gallery’s Into the Night: Cabaret & Clubs in Modern Art exhibition.  Radio Local has toured to town squares, parks and remote locations across the UK.

Culture Mile is the City of London’s cultural district, stretching from Farringdon to Moorgate, led by the City of London Corporation, with the Barbican, Guildhall School of Music & Drama, London Symphony Orchestra and the Museum of London. Together, the five partners are creating a vibrant, creative area in the north-west corner of the Square Mile.