Returning with the third edition of their festival, Chinese Arts Now will stage ten weeks of new exhibitions, performances, screenings, comedy and scratch nights showcasing British East and South East Asian Artists online. Seeking inspiration from the neo-Gothic architecture of Two Temple Place, fine artist and singer-songwriter Chloe Wing presents an art installation fusing fashion and design with a musical element – a specially crafted paper gown and headpiece drawing on themes of gender, social conventions and mental health. Ahead of the digital showcase, Chloe tells us more about her inspirations for the piece, the installation’s creative process and what audiences can expect from the installation. 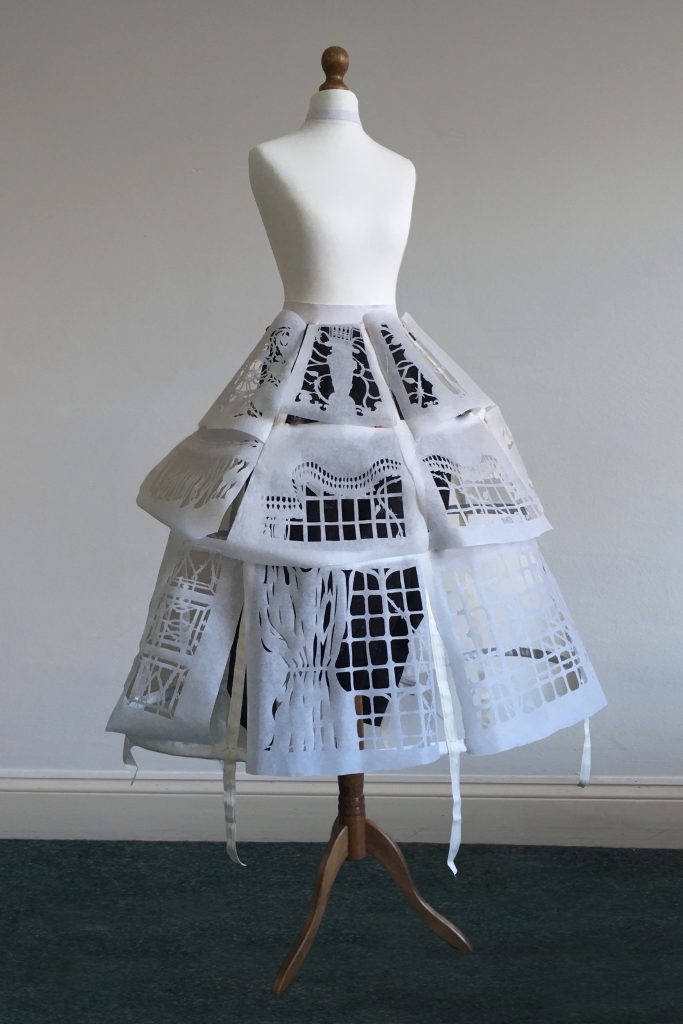 Hi Chloe, you’ll be taking part in Chinese Arts Now’s 2021 Festival, how are you feeling ahead of the event?

It’ll be very different for me, to do something like this, especially performance; it’s something that I’m experimenting with at the moment, so lots of new things for me as an artist, which is always exciting.

As part of the festival, Chinese Arts Now will be putting on an exhibition at Two Temple Place alongside a number of other commissions. What does it mean to have their support and showcase your work?

It means a lot! I graduated in 2014 and I’ve been part of many different things, but it’s hard to find a niche for what I do. It’s a great opportunity for me to explore and experiment with new ideas, and also to have the chance to respond to this unique and inspiring space.

You’ll be presenting a cut out paper gown and headpiece, representing the invisible and silent feminine presence in a traditionally masculine space. What inspired you to explore this particular topic further?

This is something that I have been looking at before, ‘patriarchy’, especially depicted in symbols. When I went to Two Temple Place, I noticed a great deal of grandeur, symbolism and designs used in the interiors, things like Roman pillars and columns, which are very traditionally masculine and powerful motifs of authority. I noticed that there was a lack of femininity in it, a lack of female figures and voices. When they were there, they were used in a smaller way so in the gown I will be incorporating and juxtaposing a lot of those emblems directly from the building, with a feminine perspective. I’ve taken lots of photos and want to directly reflect the beauty of Two Temple Place in this piece too. The building holds a lot of social ideologies and pressures and this relates to mental health which is a huge part of what I do. 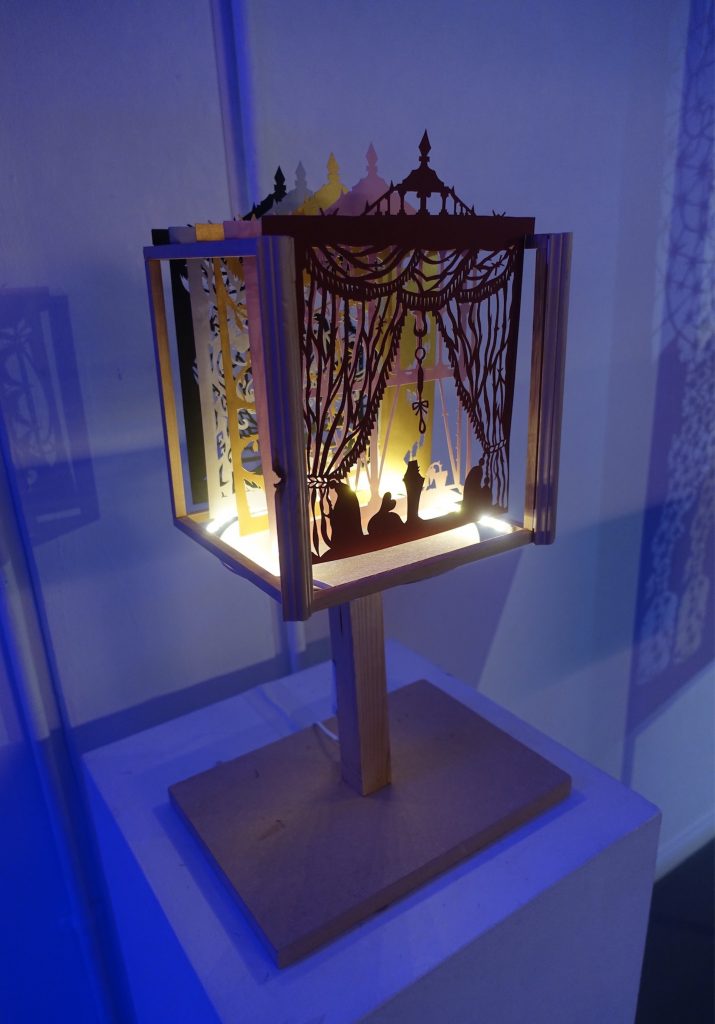 What has the creative process for your exhibition involved?

Although what I do is very meticulous and intricate, my ideas are quite spontaneous; I love the way that this project has been so organic. I was invited to respond to the building and it went really well with the themes that I look at already. I think that many of the ideas and the imagery that I use are quite playful, even though they could seem very controlled and precise. I change things as I go along as well, I go with the feel of it and it’s quite intuitive for me to make. I hand cut everything, I never use laser cutting as I want to have that imperfection in what I do. I want that real connection, idiosyncrasy and hands-on craft element to it.

Have you learned anything new from creating the exhibition?

Yes, so it’s interesting, I see this as a part of lockdown actually that I’m engaging with things that are challenging and I’ve thought about for a while. When I did the show for CAN earlier this year (2020), I made a piece that was rotating, I made smaller pieces. My installations are usually very big in scale, so it’s great that CAN has helped me to realise some things that I have been thinking about for a while.

So with the gown – actually a friend gave me this idea when we were at uni, she had a dream about me wearing a cut out dress – I’m really interested in fashion design but I’ve only just started to use a sewing machine properly during lockdown, I’ve had it for a long time but never got round to using it. I bought a mannequin for the first time and this gown that I’m making is taking past ideas of corsets and crinolines, which are very restrictive and constricting. I’m very interested in the psychological idea of restriction of women’s self-expression. So many things are reflected in this gown, it’s an amazing space, which has inspired me to make it finally, it’s all been very positive for me as an artist to embrace the things I love like fashion, which I always felt a bit guilty about as it can be deemed very superficial. 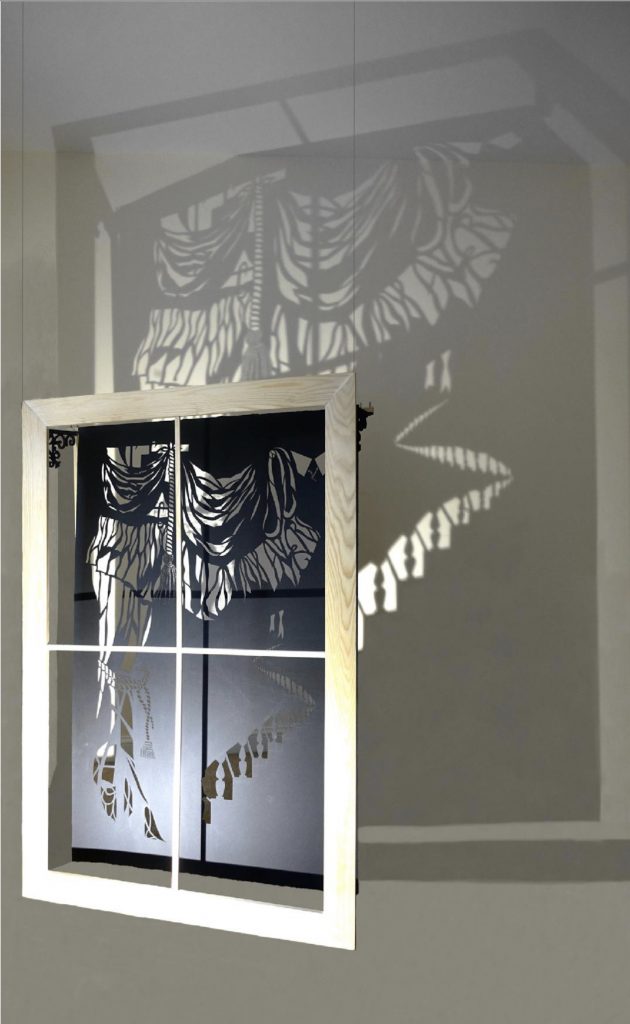 What can audiences expect?

I think my work has an emotional and human aspect to it, my aim is to make it atmospheric and immersive. I think that when you look at the work, it’s hopefully evocative. It might be positive, it might be negative, it might be conflicting. Any response is always good to have.

I do music as well, I think music is automatically a very inward feeling thing that people can respond to very quickly and it’s not visual. For me I like to combine the visual with the audio to make something quite holistic, and it will be intriguing for me to see how people respond to it.

What would you like for audiences to take away from the exhibition?

I always think the audience should take what they want from an exhibition. It’s a personal thing for everyone. When I go to see a show, I want to see it with my own eyes, especially at first. Saying that though, I try to highlight psychology in our everyday lives and thinking in my artworks. The psychosocial aspect of living fascinates me and I wonder if that is apparent in my work? We can sometimes live and think on an autopilot mode and I think it’s healthy to question why we do certain things sometimes.  Things such as gender roles and conventions. My work can be seen as initially decorative and seemingly attractive at first glance, but on deeper inspection I hope that a darker side comes out. We may need to question invisible meanings, or might need to amend them to really suit ourselves and to think about our welfare in that respect.

Chloe Wing’s work can be seen at CAN x TEMPLE PLACE from Friday 19 February until Sunday 21 March, part of CAN Festival 2021, to find out more, visit here…