Theatre maker Heather Agyepong talks about her show ‘The Body Remembers’, starting off at Bernie Grant Arts Centre before embarking on a tour 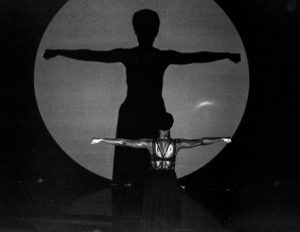 How trauma presents itself differs from person to person, the impact of which affecting a person on a physical, emotional as well as spiritual level. Exploring this complex topic further within her latest work, theatre maker Heather Agyepong, alongside co-creators Gail Babb, Gillian Tan and Imogen Knight present The Body Remembers, a look at how trauma lives within the body, particularly within Black British women across different generations. Ahead of the show, starting off at the Bernie Grant Arts Centre from late October before embarking on a tour, Heather tells us more about what to expect.

Hi Heather, you’ll be presenting your show The Body Remembers, starting off at the Bernie Grant Arts Centre from late Oct before embarking on a tour in early Nov. How are you feeling ahead of the show?

I’m really excited. It’s interesting because this show is kind of part of my overall healing journey. I feel like I need to do this show for me, so I’m just excited to kind of start exploring what’s happening in my own body and being really vulnerable in front of audiences. It feels like we all need a bit of vulnerability right now, and honesty, so I’m really excited to start that conversation in October. So I feel really good!

The Body Remembers is a solo piece, exploring how trauma lives in the body, particularly for Black British women across different generations. How have you found exploring this further?

So, first of all, Gail Babb, Gillian Tanand Imogen Knight are co-creators of The Body Remembers. Imogen was my first co-creator; Imogen uses the body through impulse and uses the body and its movement authentically. That’s always been her practice. I saw a piece of work she did at The National, Les Blancs, and I was blown away by it. Somehow, Fuel were working with her and I was like ‘Oh my god! You’re the woman who made that piece of work!’ We just started talking about authentic movement and impulse, and though I had no experience, Imogen guided me through that process of moving,and moving away from choreography and focusing on what your body wants to say.

Gail used to work for an organisation called Talawa and I worked with Gail there. She’s just a flipping visionary. I knew that although the piece is not linear or a story, she’s very good at creating some sort of feeling of narrative and clarity so I thought she would be the best person to help with the dramatization.

Gillian Tan is just an extraordinary artist whose work is really impulsive and based on feeling. Gillian worked on the projection and lighting design and she was really intuitive in terms of feelings or ideas. She would just say ‘what about this?’ She was really good at using her intuition to create these beautiful projections.

I also need to mention Donato and Tanya. Donato is our composer and sound designer and Tanya is our stage manager. They were incredible at creating these beautiful collaborations and the offering of the piece. The whole team worked very much holistically.

What have you learned/taken away from creating the production?

I think what I’ve taken away from creating the project is that our gut and our impulse and instincts can be trusted. I think I always second guess myself for making work. Like I said, this work was really created through a feeling or a sense of what feels right. There’s no narrative, it’s really based on inner instinct for lack of a better word. We’ve made this piece of work, which I’m really proud of, entirely based on that. Of course, there’s expertise from the collaborators but that’s the core of what the work is based on. It’s made me trust myself a bit more. It’s made me release that some of that inner wisdom is there and I want to continue to tune into that as I continue to make work.

The heart of The Body Remembersis a movement exploration. I explore different parts of my body and kind of make that clear of what I feel like my body is holding on to. There are these explorations around tense and release movements, about going straight to the source of whatever I’m holding onto and releasing that out. There’s a lot of tension and release, beautiful projections that, for me, are quite emotive. Not in a bad way, but in a soft and kind of refreshing way. Quite reflective. So, this environment of self reflection and beauty. Also, this soundscape throughout the piece sounds like you’re going inside the body. It’s an incredibly immersive piece because it feels like you’re in something. The piece is definitely like a 360 experience, so I think it will be quite unique but also I think everyone will take something different from the piece, it’s quite open in that sense.

What can audiences take away from the show?

I want them to have their own particular experience and specific experience in themselves. I hope that the audience just listens to themselves more, in whatever capacity that is. When you watch the piece, you’re actually asking to listen to what’s happening in your own body, not just about me. So I hope that it encourages a more empathetic ear to themselves. If I could do that, just that, then that would be magic.

The Body Remembers will show at the Bernie Grant Arts Centre before embarking on a tour. The show will play at Battersea Arts Centre from Wednesday 20th October until Thursday 4th November 2021. Tickets are Pay What You Can…