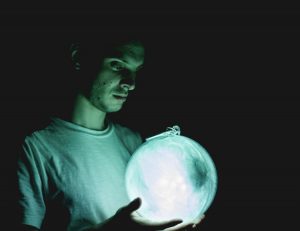 Hero – (noun) a person who is admired for great brave acts or fine qualities. The ‘hero’ is an archetype often portrayed within our literature, from fairy tales, to fantasy novels, to comic books as being the idealised embodiment of perfection, the one that ends up defeating the bad guys and saving the day. I’m sure, however, within our daily lives, we all have our very own ideas as to what heroes look like to us, and what this concept means within the real world. Exploring this concept of the ‘hero’ within his show Catching Comets, writer and director Piers Black tells us more about revisiting the 2019 Edinburgh Fringe piece, working with the creative team to realise the production and what we can expect!

Hi Piers! You’ll be revisiting your 2019 Edinburgh Fringe show Catching Comets from the 14th to 19th September at The Pleasance Theatre. How are you feeling ahead of the run?

Yeah,great! It’s been such a bizarre experience with postponing and cancelling the show so many times now – I still can’t really believe it’s going to finally happen in front of an audience again.

Catching Comets is a one man show following Toby, an ordinary man turned hero as he attempts to save the world. This intertwined with him falling in love and displaying vulnerability and emotions. What inspired you to create this fantasy inspired show?

The story sort of came about from having a long think about who my heroes were, and what it means to be a hero today. It was partly a reaction to seeing so many Hollywood movies being rebooted and repackaged recently, where we’d be given these same old archetypes of what film culture has been telling us are ‘heroic figures’, worthy of our praise and adoration – and if you grew up watching blockbuster action movies that was almost exclusively; male, muscley, aggressive, unemotional and a whole host of other problematic ideals.

It seemed strange to me that we were bringing these people back when society has moved on so far from this. And I suppose I wanted to ask what you’re meant to do if you don’t look or sound like any of the heroes you grew up with. Really the show is about how it takes a lot of bravery to be vulnerable.

How have you adapted the production since its run two years ago at the Edinburgh Fringe Festival?

We talked a lot about redrafting with the events of the last two years in mind, and inevitably there are small things that have had to change. But actually, what we found, is that instead of feeling like we have to change plays to make them ‘Covid shows’, everything that comes out now is going to be a Covid show, just because of where the world is right now, whether that’s Hamlet or Shrek the Musical. People are going to find things in every story that now means something new to them, because of the shared experience we’re all facing still. And that is very much the case with this show – it looks at how important it is to be with people you love, how to live with fear, and to be brave in different and selfless ways-stuff that was all there already, and hasn’t changed, but suddenly feels like it’s understood in a very different light.

Starring Alastair Michael, the show also sees you directing. How have you worked together to realise the show?

It’s been a lot of fun! Ali and I have worked together for years now, and we run Ransack Theatre together. So we’ve been developing the show for a long time, taking it through a number of iterations, and working with an absolutely incredible creative team, who have made the show a dazzling and constantly surprising experience that is miles ahead from what we’d initially imagined.

Although I’ve written the script, the input of Ali and the other creatives – Bryony, Chi, Heather, Laura, Matt, Mark and Natalie – has generated loads of the material. I’ve got very fond memories of being in a rehearsal room in Manchester, with Ali running around improvising blockbuster action fight and chase sequences, while creatives shouted different scenarios out to him. I think watching him wrestle an imaginary shark was probably the highlight.

We’ve pitched it as ‘a disaster movie about falling in love’. But I think it works equally well as a romcom about the end of the world. The show is really two stories at the same time, one a very performative, knowing, pastiche of action blockbusters – beating up bad guys and saving the world – and the other is a very simple story about meeting someone and falling in love. Over the course of the play those two narratives begin to speak to each other and that’s where it really comes alive.

It’s also just as important to us that the show is a really fun night out. As a one-person show, it really requires the audience, as so much of it is about feeling the energy between them and the performer. So I’m really excited for us to offer something that is live and funny and poignant, and couldn’t happen anywhere other than in a theatre with an audience.

To know that there are real heroes everywhere in the world! And that they aren’t defined by the size of the abs.

Catching Comets will show from Tuesday 14th until Sunday 19th September 2021 at The Pleasance. To find out more about the production, visit here…