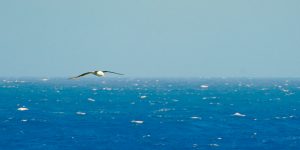 With an increased emphasis on the natural world around us, on a local as well as global level, we’re at a crucial point in time in terms of conversations had about climate change, questioning how best to look after our home. Observing the beauty of his hometown Kilnsea, situated in East Yorkshire, writer Tom Wells explores his locality and its vulnerabilities, recognising a need for better care. Directed by Tessa Walker, Big Big Sky is currently showing at the Hampstead Theatre. Tessa tells us more about the show’s collaborative process and what to expect!

You’re the director of Tom Wells’ production Big Big Sky currently showing at the Hampstead Theatre. How are you feeling?

I’m feeling fine thank you! I feel really pleased that the play is on. We had quite a long time, and I feel like it’s been in our lives for a long time. And of course, coming out of this pandemic, it was so uncertain what theatres would be. So to have something on in the first phase of theatres coming back to life is really a huge privilege.

What inspired you to direct the show?

I’ve worked with Tom loads, I think this is our fifth collaboration. It was actually, originally a commission when Roxanna Silbert and I worked at the Birmingham Rep. She was the Artistic Director, and I was the associate. I’ve always loved Tom’s writing, I really love the way he sees the world, the way he understands how people work, the way he understands how comedy works, the way he tells stories, and how he does it. So I’ve always been a huge fan of his work from the second I read his very first play, which would have been over 10 years ago now. When we commissioned the play, it would have been a play that I would have directed, just because we have a working relationship of over a decade long now. Like I do with all his work, I really warm to it and I think maybe we see the world in a similar way, even though our backgrounds are different. So it always felt that I would direct it actually. It’s really lovely after a number of years, and the pandemic, and the change of cities, and change of Artistic Directors, that it’s on now and that we’ve got to work together again!

You’ve mentioned that you’ve previously worked with Tom on numerous productions. What did the collaborative process involve for Big Big Sky? Was your process similar to how you’ve both worked together previously?

I think it’s a little bit different every time, what was really different about this is that we did the majority of both growing the play and production together whilst we were in lockdown. We had a lot of meetings on Skype, because the play moves in particular seasons, and it threads so delicately through the stories of these four characters. Rather than doing big re-writes every time, we went by season, by season, by season. We worked thematically and in character, we had extra time so we could take it slightly slower. Because it’s such a delicate play, it’s as much about the things that you don’t see and that aren’t said as it is about the things that you do see and are said. It was a response to the time, we couldn’t be in a room together, so it was partly that, but also I think might have been very particular to the shape and the spirit of this play, as much as it was about the time we were working in. We always work very collaboratively across the whole of the process, from the dramaturgical process, to the design process, to the process of auditioning, to being in rehearsals, we’re connected across all the phases of it, but this felt slightly different just because of the distance that was created by none of us being able to be in spaces together. But actually conversely I think it might have really benefited the sort of play that this is, it is a play about distance in a way, there are big leaps in time, so I think the spirit of us working together is always the same, but this time, the structure of it was different just because of how the world was.

What have you learned and taken away from the process?

Just how brilliant it is to be in a room with other human beings who make theatre! I’ve been reminded of the very basics of theatrical storytelling, and that it just requires you to be in a room with other human beings. I don’t know how I’d do without it, a lot of people made some very beautiful work on Zoom, digitally, which is really extraordinary, but for me personally, it’s about being in a space with actors and I’d forgotten how exciting that is. I’d forgotten how wonderful it is to see things come to life, and to be part of a process telling a story. It’s wonderful on the good days, it’s even wonderful on the days where you don’t get much done or you don’t make the discoveries you want to. It felt like such a privilege to be in a room with other people again. But particularly on this play, and particularly with Tom because we are close friends, and we work together a lot. The play has seen out a huge amount of change in the period of time it’s been in the world. I was reminded of how nerve wracking it is when you put something in front of an audience for the first time, I’d forgotten that. I’d completely forgotten about dress rehearsals, previews, re-working stuff and just the nerves around that! I felt so much more nervous this time than I have for many years because I’m not used to it, that muscle that you exercise drafting a production and putting it on, I’d forgotten what a lot of it felt like! The way it felt came as a bit of a surprise. It was an extraordinarily unique experience that won’t be repeated.

Big Big Sky is currently showing until Saturday 11th September 2021 at the Hampstead Theatre. To find out more about the production, visit here…

For our review of Big Big Sky, visit here…

« Previous post
dream(ing) field lab talk about their installation ‘another garden (will be our city)’, showing as part of Tonybee Studio’s ‘What Shall We Build Here’ season
Next post »
London Zoo @ The Bread & Roses Theatre Review