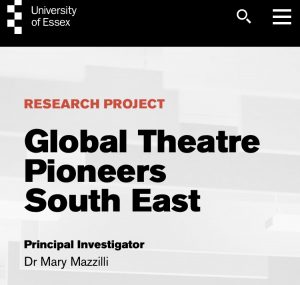 Formed with the hopes of creating a network of first generation migrant theatre makers based in the South East of England, Dr Mary Mazzilli, from the University of Essex’s Department of Literature, Film, and Theatre Studies has joined forces with Professor Renee Luthra – Sociology, Senior Research Fellow Dr Alita Nandi at the Institute for Social and Economic Research, with the support of theatre advocacy group Migrants in Theatre present the Global Theatre Pioneers South East Project. This is a collaborative initiative funded by the Economic and Social Research Council (ESRC) through its Impact Acceleration Account (IAA), creating a crucial much needed platform for creatives. Starting with a survey, which is currently live to complete, Dr Mary tells us more about the pioneering and ambitious project.

Hi Mary, The Global Theatre Pioneers South East Project is currently inviting first generation migrant theatre professionals living in the South East to take part in a survey with the hopes of information collected helping to improve the social and economic circumstances of creatives in the region. What does it mean to be able to build an important platform such as this?

It’s very important because it will give visibility to those that work in the industry, especially to those that work in the South East. In London, there’s much more diversity, I’m pretty sure there’s quite a few first generation theatre makers who live outside London because London is so expensive and in the South East, there’s a lot of art that’s going on. It’s a very big region, from Bedfordshire all the way to Sussex, also including Portsmouth and Southampton, so it’s quite a rich area. In Essex, there’s a couple of theatres here, there’s activities going on. It’s important in terms of giving visibility to those that work and are based here, and possibly show venues and institutions that maybe they should programme work that is made by first generation theatre makers that have a different culture background and can bring a lot to the arts when given the chance, because maybe their work is quite niche, or it’s a bit different, there might be barriers – language barriers, all sorts of things. I myself am a first generation theatre maker, I come from Italy, and I’ve encountered, especially in the South East, I used to work in London, I’ve noticed outside of London it’s a lot more difficult.

The survey explores the impact of migration policies, Brexit and Covid-19. The Global Theatre Pioneers South East Project formed in collaboration with Professor Renee Luthra – Sociology, Senior Research Fellow, Dr Alita Nandi at the Institute for Social and Economic Research and has been launched in partnership with theatre movement ‘Migrants in Theatre’. How have you all collaborated to realise the project?

In terms of collaboration, I’ve worked with both Renee and Alita before in particular, I looked at their recent research that they did on the effect of Brexit on European migrants, and the research finding was, if European migrants work in a protective environment, their vulnerability around Brexit decreased, they felt better – they were looking at University workers. Then I was thinking, how does that relate to theatre makers who are freelancers who are already more vulnerable, especially during Covid? How do they feel about this? How does their research apply into different areas? So one thing we’ll be looking at in the workshops and interviews is, trying to share their findings, and getting responses from the participants, and the impact of that and how that can inform creative work. Migrants in Theatre – they’ve been quite involved from the start, the conception of the project, they’re interested in creating a cultural hub in the South East. I found them very inspiring, they’re the first organisation that have really taken on board all the things I’ve experienced as a first generation theatre maker, so I think they’re great.

The survey will be followed by interviews, personal development workshops, writing, theatre and film opportunities, a round-table discussion in the new year and the creation of a tool kit for regional theatre industry professionals to help shape post-Covid planning whilst ensuring diversity. Can you explain what these elements of the project will entail?

The first step is the survey, a scoping exercise to know who they are, how they feel, and where they live. Through that, we’ll invite those who are interested in taking part in the workshops, we have two workshops, one will be  over Zoom because South East is a big region, we won’t be able to go to all of those areas, a three-hour workshop, and one at the University of Essex. We will share, practice, they will be able to express their points of view – we’re still forming the structure of the workshop but the aim is to empower them and I’ll share my own experiences also as a theatre maker. The interviews will be led by Renee Luthra and Dr Alita Nandi, where they’ll ask questions that are more in depth, about their experiences of Covid and Brexit – that’s the second part. The third part will be a casting of two actors, they will be working together with a theatre director and myself to devise a short film, a documentary short film talking about the difficulties theatre makers have encountered. Hopefully it’ll be professional enough to distribute to festivals – that part is paid. The end of the processwill be the creation of a local hub, hopefully with that, they’ll be some sort of opportunities, also the impact we want to have with this project is that we need to educate venues and industry to embrace their work.

This project appears to be the first of its kind, focusing specifically on first generation migrant theatre makers based in the South East. How does it feel to be a part of this crucial movement?

It’s quite exciting, it’s also a bit scary at the same time because its unchartered territory. I’ve done projects like this in the past, I’ve written a verbatim play where I interviewed migrant communities from North Essex, it was on a much smaller scale, it didn’t involve theatre makers as such. But this feels bigger, a bit scary. I’m hoping that these six months is the start of something more, we’re hoping to attract more funding after this, so on a much larger scale. In six months, you can only scratch the surface.

The Global Theatre Pioneers South East Project is currently inviting participants to fill in their survey, to find out more, visit here…