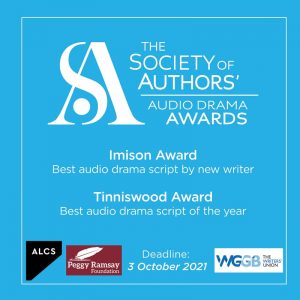 The Imison Award – awarding the best original script by a writer new to audio drama and the Tinniswood Award – awarding best original script of the year are both currently open for submissions. Forming part of the prestigious BBC Audio Awards, previous winners of the Imison Award include Fraser Ayres for Maynard (2020), Lulu Raczka’s A Lifetime(2019) and Adam Usden’s The Book of Yehudit(2018), and of the Tinniswood Award, Christopher Douglas for Tristram Shandy (2020), James Fritz’s Comment Is Free(2017) and Julian Simpson’s Fugue State (2016). Society of Authors continue on with their aim of supporting and celebrating audio drama writing talent. Ahead of the deadline which falls on Sunday 3rd October, Society of Authors tell us more about both awards.

Hi Society of Authors, you’ve recently opened submissions for the next Imison Award and Tinniswood Award. How are you feeling?

The Imison and Tinniswood Awards are a highlight of the SoA calendar particularly for the Scriptwriters Group. As the deadline for submissions draws near (October 3); we have already started getting a flurry of email queries and entries. It’s great being exposed to so many talented writers and discussing the entries with the judges until they eventually decide on the winners. Last year we had a record number of submissions as we’ve broadened the remit so we’re hoping for the same again this year.Sophia A Jackson, SoA Scriptwriters Group coordinator.

As an award administrator and on the staff at the SOA I personally am hoping we receive a healthy multitude of submissions which demonstrate the plurality of voice, experience, character, and style which we collectively recognise and from which we take inspiration in our daily lives. Historically these have both been awards for radio as opposed to audio drama and we are excited to see how new players making use of newly opened avenues might have shaped the development of the audio drama genre over the past year, a year that has been one of desperate hardship for so many and of opportunity for some.  Theo Jones, SoA Scriptwriters Group coordinator

Both Awards are sponsored by Authors’ Licensing and Collecting Society (ALCS), a not-for-profit organisation started by writers for the benefit of all types of writers. An important organisation for fellow writers, what does it mean to have their support?

ALCS’ support allows us to continue to run the Imison and Tinniswood Awards, bringing recognition, opportunity and financial support to writers of audio drama, whose work is often undervalued and rarely recognised by public awards.

The judging panel for the Imison Award are committee members of the Society of Authors Scriptwriters Group – Barney Norris, Jamila Gavin, David Morley, Ian Billings, Sean Grundy, Rhiannon Tise and Ben Carpenter. The Tinniswood Award panel yet to be confirmed. What will the judging process involve?

The process involves a vigorous debate among the judges to decide which script most fulfils the brief.Between us we read all of the submissions and then come up with the longlist,the shortlist and finally the winner.  David Morley, Chair, SoA Scriptwriters Group

What advice can you offer to prospective applicants?

My advice would be to read the eligibility criteria. We love to read great drama but make sure it fits this award. Also, talk to your producer or someone else involved in the production, or just a trusted friend and get their opinion on how to sell it to us. What’s the story? What’s the drama? Who are the characters? Why is it great audio? What makes it stand out in a busy field?  We want and expect to be taken on a journey by these dramas.David Morley, Chair, SoA Scriptwriters Group.

Entries are open until Sunday 3rd October 2021. To find out more about both awards, visit here…

For our interview with Fraser Ayres on his 2020 Imison Award winning play ‘Maynard’, visit here…