Hamlet – Prince of Denmark, is left grief stricken after the murder of his father by his tenacious uncle, Claudius who now resides the thrown alongside his mother, Gertrude. A tale of revenge, Hamlet’s melancholic mental state is clear, this dictating how he navigates the world moving forward.  One of Shakespeare’s most iconic tragedies, Cush Jumbo takes on the complex lead in Greg Hersov’s adaptation. 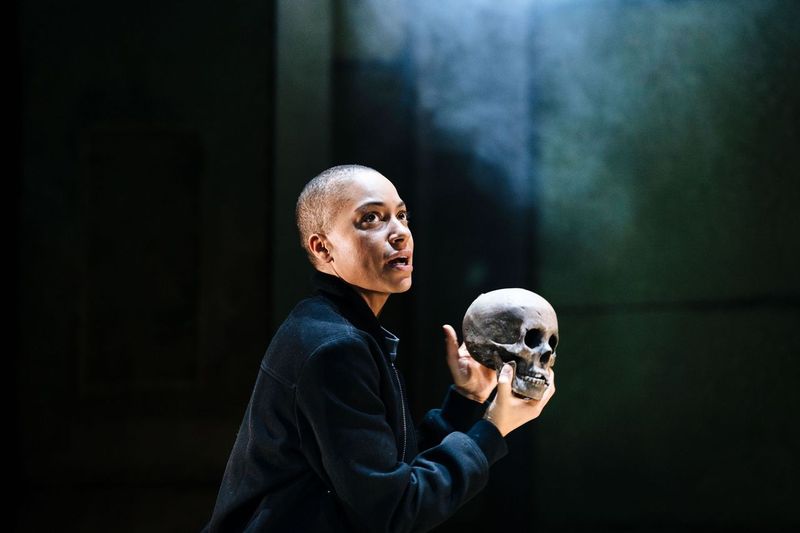 Adorned across Anna Fleischle’s beautiful palatial, rustic stone paved stage, Hersov’s three hour long adapted production entertains. The production is skilled at emphasising how Hamlet’s sorrowful disposition impacts all around him, the ensemble effort a thoughtful one. Adrian Dunbar’s Claudius charms, and as Hamlet’s father’s ghost haunts, Tara Fitzgerald’s Gertrude radiates with sophistication and gravitas, Joseph Marcell’s Polonius is jovial, whilst Norah Lopez Holden’s Ophelia is delicate yet embodies an inner strength. Jonathan Ajayi’s Laertes defiant and rebellious, Jonathan Livingstone’s Horatio grounded, Adesuwa Oni’s Barnado/Elsinore Security strong and Leo Wringer’s Fortinbras Captain and Gravedigger captivating. The talent of the cast made prevalent by the choice of having them multi-role, bringing to life the world of Hamlet more so.

Jumbo effortlessly taps into the lead role, capturing Hamlet’s sardonic air. A wounded, weighted soul, aloof – any appearance made by Hamlet an intriguing one as you’re never quite sure as to what he’ll say or do next. Temperamental, a talented being who seeks joy in the creation and observation of art. Hersov and Jumbo illuminate the often misunderstood genius well, the iconic ‘To be, or not to be…’ extract, brilliantly interpreted. Taz Skylar’s Rosencrantz and Joana Borja’s Guildenstern are light hearted energies able to fuel a sense of fun into the intense evening, drawing on the noble’s softer, lighter side.

What the production thrives in, is the character study of Hamlet, such an unpredictable character, the question of mental state is prevalent throughout. Hamlet an intriguing presence who moves to the rhythm of his own beat, silently driven by revenge and the loss of his father – you question whether he’ll ever truly gain contentment. A thought provoking watch!

Hamllet is currently showing until Saturday 13th November 2021 at The Young Vic. To find out more about the production, visit here…