Recently, the Kammerspiele presented the world premiere of Nora Abdel-Maksoud’s satirical play Jeeps, which she also directed. Abdel-Maksoud was born in Munich and has been writing and directing her own plays since 2012. Her darkly humorous dramas criticize the crass unfairness in our society. 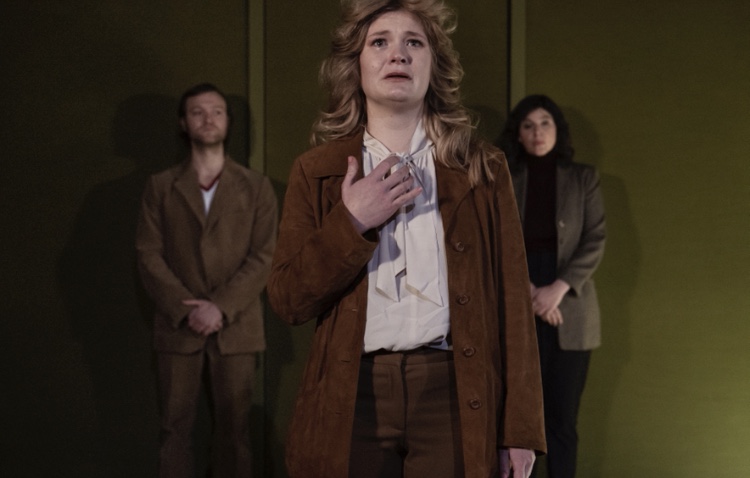 In 2017, Maksoud won the “Best Young Director of the Year” award by magazine Theater heute and received the Kurt Hübner award as Best Director. Her play Café Populair received the Hermann Suderman award in 2019. Jeeps is her first production at the Kammerspiele, yet there are further common plans over the next three seasons. Maksoud develops her work together with the actors before the actual play is rehearsed.

Jeeps deals with a radical redistribution of wealth – gained by inheritance. The government has passed a bizarre reform bill to alleviate social injustice and to prevent classism. Once a person dies, their inheritance is confiscated and controlled by the state. The original heirs are dispossessed and forced to participate in a lottery along with everybody else. Everybody gets one lottery ticket, which can lead to a great deal of money or a great deal of debts. And who is put in charge of administering the lottery but the job centre?

The performance takes place on the forestage, in front of a yellowish-green wall. Before the story actually begins, the actors debate income distribution in Germany, which is anything but fair. Every fifth child lives in relative poverty. Yet an estimated €400 billion are handed down to the heirs every year. How does the expectation of a hefty inheritance influence individual decisions? Are the heirs ever willing to share the wealth that they did not earn themselves?

The play takes place on one day, three months after the bill has been passed. The parking lot of the job centre is filled with SUVs of the dispossessed, while the queue of the angry would-be heirs is so long that it takes those at the very end of the line three days to reach the building. Silke (Gro Swantje Kohlhof), who runs the start-up business “Laptops in Lederhosen,” was counting on her inheritance to finance her existence. She has never learned to deal with bureaucrats and feels lost and helpless. Thankfully, she finds an ally in Maude (Eva Bay), a former bestselling romance writer, who is experienced in dealing with bureaucratic traps, due to being one of the many long-term unemployed. Barely surviving on “Hartz IV,” she is trying to raise her rate by a few euros but finds the job centre deducting the few pennies she makes by collecting deposit bottles at the job centre from her payments instead. Together Silke and Maude fight against the indifferent bureaucracy, represented by case workers Armin (Stefan Märki) and Gabor (Vincent Redetzki), who seem completely overwhelmed by the situation.

Accompanied by musician Volkmar, the “Hartz IV shaman”(Enik), the opposing parties exchange blows until the situation spirals completely out of control. Everybody is looking for their own advantage – „yuppie larvae“ against „victim sausages“, social workers against class advancers, poor children against the middle class, SUV driver against SUV driver.

Skilfully directed by Abdel-Maksoud, the cast excel at this black comedy that succeeds in making the audience laugh and feel guilty at the same time. Swantje Kohlhof is hysterically funny as the naïve entrepreneur who has never learnt to support herself. Bay is hilarious as the clever novelette writer, who is suffering from a quirky affliction. Märki is very good as the self-important Armin, who considers himself Gabor’s supervisor due to his advanced age, although they are doing the same job. Redetzki convinces as the untouchable case worker and SUV fan Gabor who controls the lottery tickets.

Highly entertaining production that should not be missed.