Marking nearly 60 years since the Civil Rights movement in the US, a movement campaigning for the ending of racial discrimination, the campaigning continues on. Pre-dating the influential movement, and an important facet of it, Alice Childress‘ lesser known satirical play Trouble in Mind instils the hostility and divisive nature of the 1950s societal and political climate, and how this presents itself within the theatrical world. 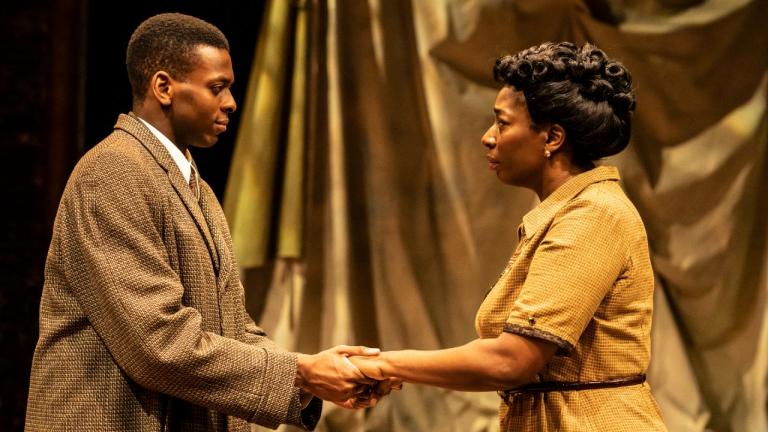 A play within a play, Trouble in Mind charts the rehearsal process of a new, controversial play by hotshot director Al (Rory Keenan) – a supposed reflection of the racially divisive climate experienced. A weighty piece tackling a pertinent subject matter, the ensemble’s workshopping of the script brings with it much humour, the stripping down of the play to its bare essentials, political – the cast’s commentary intriguing to watch unfold and thought provoking.

Nancy Medina directs a buoyant production, one where we’re made aware of the heaviness of the political climate outside of the rehearsal room, but one where, although the show rehearsed presents reality, also offers an escape. We share with the cast as they discuss and debate how scenes should play out, some in agreement with director Al, all while they wait in hope for their big break. Trouble in Mind is a powerful reminder of what theatre can achieve societally, a show especially for anyone involved within theatre who enjoys watching the satirical breakdown of a show’s creative process!

Trouble in Mind is currently showing until Saturday 29th January 2022 at the National Theatre. To find out more about the production, visit here…