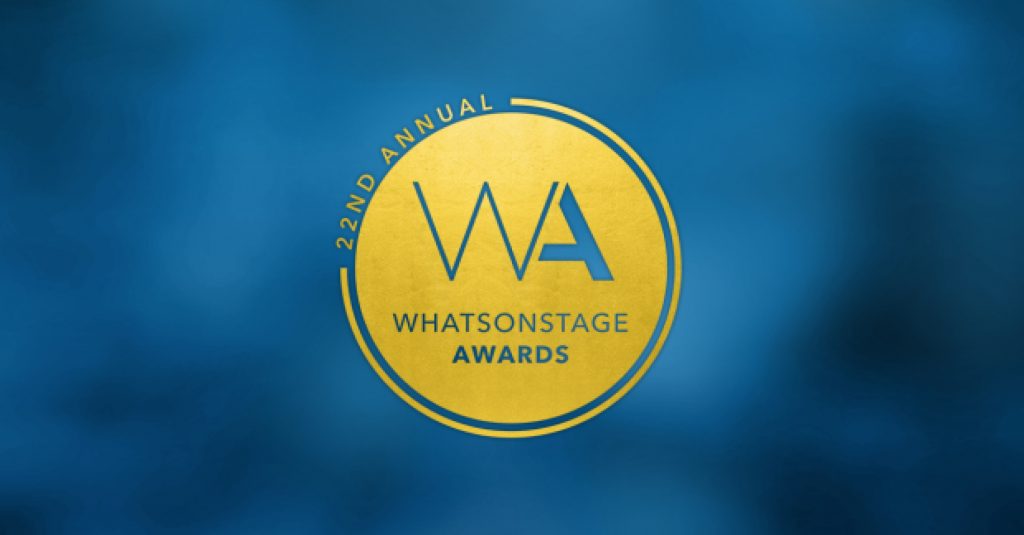 In addition, Amy Hart and Oscar Conlon-Morrey will be live on the red carpet chatting to the stars as they arrive from 6.30pm via WhatsOnStage’s Facebook page.

The evening will feature performances including:

In the musical categories, Get Up, Stand Up! The Bob Marley Musical receives 10 nominations, with Back to the Future the Musical revving up closely behind with 9 nominations. Cabaret makes its mark with 7 nominations, mirrored by Moulin Rouge! The Musical and Andrew Lloyd Webber’s Cinderella.

In Best Performer in a Female Identifying Role in a Musical, Barks and McKeon face stiff competition from Cabaret’s Jessie Buckley, Aimie Atkinson for Pretty Woman, Beverley Knight for The Drifters Girl and previous WhatsOnStage Award winner Carrie Hope Fletcher for Andrew Lloyd Webber’s Cinderella. For Best Performer in a Male Identifying Role in a Musical, Back to the Future’s Roger Bart and Olly Dobson go head to head against Ivano Turco for Andrew Lloyd Webber’s Cinderella, Arinzé Kene for Get Up, Stand Up!, Eddie Redmayne for Cabaret, and Julian Ovenden in South Pacific.

In the musical supporting categories, Ormson and Ugoala face Hugh Coles and Cedric Neal both from Back to the Future the Musical, Blake Patrick Anderson from Be More Chill and Robert Lindsay from Anything Goes; and in the Best Supporting Performer in a Female Identifying Role, Andrew Lloyd Webber’s Cinderella’s Victoria Hamilton-Barritt and Rebecca Trehearn are both nominated, alongside Gabrielle Brooks for Get Up, Stand Up!, Joanna Ampil for South Pacific and Millie O’Connell for Rent.

Also performing well in the straight play categories are The Ocean at the End of the Lane, Magic Goes Wrong, 2:22 A Ghost Story and Cyrano de Bergerac with 4 nominations each.

For her stage debut in Anna X as part of Sonia Friedman’s RE:EMERGE season, Emma Corrin receives their first WhatsOnStage nomination for Best Performer in a Female Identifying Role in a Play, nominated alongside Gemma Arterton for Walden in the same season, Lily Allen for 2:22 A Ghost Story, Patsy Ferran for Camp Siegfried, Sheila Atim for Constellations, alongside Saoirse Ronan. Best Performer in a Male Identifying Role in a Play nominees are Henry Lewis for Magic Goes Wrong, Ben Daniels for The Normal Heart, Hadley Fraser for 2:22 A Ghost Story, Richard Armitage for Uncle Vanya and James McAvoy for Cyrano de Bergerac.

For Best Supporting Performer in a Female Identifying Role in a Play, the nominees are Nancy Zamit for Magic Goes Wrong, Michelle Fox for Shining City, Penny Layden for The Ocean at the End of the Lane, Isobel McArthur for Pride and Prejudice* (*sort of), Akiya Henry for The Tragedy of Macbeth and Aimee Lou Wood for Uncle Vanya. Best Supporting Performer in a Male Identifying Role in a Play nominees include Jake Wood for 2:22 A Ghost Story, Richard Rankin for The Tragedy of Macbeth and Jonathan Sayer for Magic Goes Wrong – all 3 plays receiving 3 acting nominations each, alongside Stephen K Amos for My Night with Reg, Nathaniel Parker for The Mirror and the Light, and Dino Fetscher for The Normal Heart.

In the fiercely fought Best New Musical category, Frozen faces competition from Andrew Lloyd Webber’s Cinderella, Back to the Future the Musical, Get Up, Stand Up! The Bob Marley Musical, Pretty Woman the Musical and Moulin Rouge! The Musical; and in Best New Play, the nominees are Magic Goes Wrong, 2:22 A Ghost Story, The Ocean at the End of the Lane, Pride and Prejudice* (*sort of), J’Ouvert and last year’s Olivier Award winner Leopoldstadt.

Best Play Revival nominees are The Normal Heart, Constellations, The Tragedy of Macbeth, Uncle Vanya, My Night with Reg and Cyrano de Bergerac; and Best Musical Revival sees the recently opened Cabaret face off against Anything Goes, Rent, South Pacific, Carousel and West Side Story.

Best Direction sees a split between musical theatre with Frozen’s Michael Grandage nominated alongside Clint Dyer for Get Up, Stand Up!, and Rebecca Frecknall for Cabaret, and straight plays with The Tragedy of Macbeth’s Yaël Farber, Katy Rudd for The Ocean at the End of the Lane and Jamie Lloyd for Cyrano de Bergerac completing the category.

To find out more about this year’s awards and to purchase tickets, visit here…