Writer and Performer Kristin Mcilquham talks about her show ‘Headcase’ to show at the Bush Theatre as part of their ‘Essex: OnStage Season’ 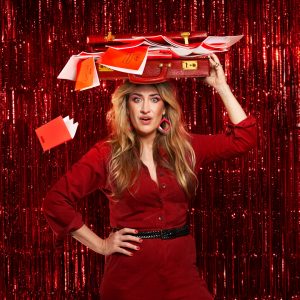 The impact of an aquired brain injury (ABI), an injury sustained via various causes including a fall, road accident, tumour or stroke can vary dependent on the patient both in the short term and long term. ‘Behavioural and emotional changes, hormonal imbalances, difficulties with cognition and memory, communication problems and fatigue (Headway Brain Injury Charity) issues that can arise as a consequence. Inspired by her own personal experience of her father dealing with a brain injury during her childhood, writer and performer Kristin Mcilquham presents Headcase, a one woman comedic monologue delving into the impact of a brain injury on families supporting their loved ones and the impact of this years post the initial diagnosis. Forming part of the Bush Theatre’s Essex:On Stage Season, Headcase will play from 11th to 16th April. Ahead of the show, Kristin tells us more about exploring this personal story further, working with the Headway Brain Injury Charity to help realise the show, supporting particularly within the research process and what audiences can expect from the show.

Hi Kristin, your show Headcase will play from the 11th to 16th April at the Bush Theatre. How are you feeling?

Nervous! Really nervous but also super excited & over the moon that this show is going to be seen at the Bush.

Headcase is inspired by your experience of your father suffering from a brain injury when you were a young child, it highlights the often-unseen impact that brain injuries have on families. What inspired you to explore this further?

Originally, I wanted to write a one woman show to create more work for myself as an actor. I workshopped lots of different ideas and attended many classes trying to find the ‘subject’. Our family had quite a turbulent time dealing with this and I wasn’t sure that people would be interested in a story about families dealing with brain injury but the more research I did the more I realised (and was surprised by) just how many people were affected by this. Then once I met Laura Keefe, my director, she really gave me the push to tell the story I was scared to tell.

You’ve created Headcase with input from ‘Headway Brain Injury Charity’ and have facilitated workshops with patients impacted by brain injury. What has this part of the process involved?

I worked with Headway East London and their members; we did an acting workshop.  Every person’s experience of brain injury is different and people have varying degrees of mobility, so with the help of the incredible staff that work there, we created a workshop that worked for everyone.  People could take part in whatever capacity they felt comfortable with, brain injury impacts memory so I was careful, sure not to create anything that required memory of lines. A lot was improvisation based and it was a whole of fun.

The show is directed by Laura Keefe, designed by Zoë Hurwitz, movement directed by Gareth Taylor. With lighting design by Charlotte Burton and sound design by Jay Jones. How have you all worked together to realise the show?

Laura creates a wonderful rehearsal room and I am incredibly lucky to have had these very experienced artists work on this show.  When I was writing this in my bedroom during lockdown never did I expect to have this team on board.  It was such a collaborative experience; everyone came with their own ideas and have put their own stamp on the show. We also had a wonderful vocal coach (Katherine Heath) & a brilliant assistant director (Michelle Payne) who both had a massive impact too.

Me and my dad had a difficult relationship because of his brain injury, and growing up I was often embarrassed of my dad’s behaviour. I found myself quite angry with him. This process has given me a greater understanding and empathy.

Creatively, I have learnt so much about producing, writing and performing a one person show.

Lots of laughter! Maybe even some tears. Definitely plenty of great music. The soundtrack to the show will fill the room with nostalgia, taking you on a journey all the way back to the 80s, then up to the 90s with some garage tunes thrown in for good measure.

I would like the audience to come away with more information on brain injury and the impact it can also have on loved ones. Ultimately, I would love the audience to leave with a feeling of hope.

Headcase will show from Monday 11th until Saturday 16th April 2022 at the Bush Theatre. To find out more about the production, visit here…