The winners have been unveiled for this year’s Olivier Awards with Mastercard, British theatre’s biggest night, which took place on Sunday 10th April at the Royal Albert Hall in London, hosted by Jason Manford. 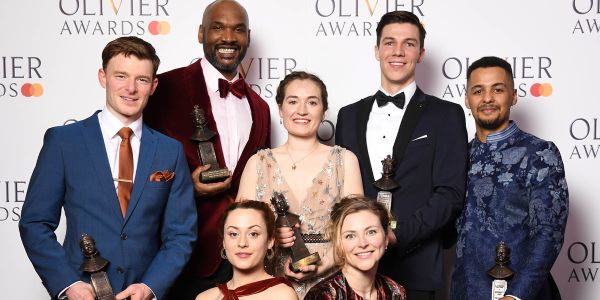 The biggest winner of the night was Cabaret, a revival of the 1966 Kander and Ebb musical which has transformed the West End’s Playhouse Theatre into the ‘Kit Kat Club’ to critical acclaim. The show won seven of the eleven categories it was nominated in, including the Magic Radio Best Musical Revival. Eddie Redmayne won Best Actor in a Musical for his performance as the Emcee and Best Actress in a Musical went to Jessie Buckley as Sally Bowles, with Liza Sadovy and Elliot Levey awarded in the supporting categories for their roles as Fraulein Schneider and Herr Schultz. Rebecca Frecknall was crowned Best Director, and Nick Lidster won the d&b audiotechnik Award for Best Sound Design.

With five wins (including Best New Play) is Life Of Pi, Lolita Chakrabarti’s stage adaptation of the bestselling novel which began life in Sheffield in 2019 and is currently playing at the Wyndham’s Theatre. Hiran Abeysekera won Best Actor for his central performance as Pi, and – in an historic first for the Olivier Awards – the seven performers who play ‘Richard Parker’, the puppet tiger – Fred Davis, Daisy Franks, Romina Hytten, Tom Larkin, Habib Nasib Nader, Tom Stacy and Scarlet Wilderink – were collectively awarded Best Actor in a Supporting Role. The production also picked up awards for set and lighting design.

Best Actress in a Supporting Role was won by Liz Carr, who played Dr Emma Brookner (based on a real-life US physician who was among the first to recognise the 1980s AIDs epidemic) in a revival of Larry Kramer’s play The Normal Heart at the National Theatre.

The coveted Mastercard Best New Musical award was given to Back To The Future – The Musical, a new stage adaptation of the hit 1985 sci-fi film currently playing at the Adelphi Theatre.

The Noël Coward/Geoffrey Johnson Award for Best Entertainment or Comedy Play went to Pride And Prejudice* (*sort of), a comedic, all-female retelling of the Jane Austen classic first seen in Glasgow.

Elsewhere, renowned Broadway costume designer Catherine Zuber was awarded Best Costume Design for her work on Moulin Rouge! The Musical, Kathleen Marshall won Best Theatre Choreography for Anything Goes (which she also directed) and Simon Hale received the award for Best Original Score or New Orchestrations for Get Up Stand Up! The Bob Marley Musical.

The award for Outstanding Achievement in Affiliate Theatre (representing the smaller London venues) went to Old Bridge at the Bush Theatre, a 2020 Papatango New Writing Prize-winning play by Igor Memic.

In the opera categories, Peter Whelan and the Irish Baroque Orchestra were awarded Outstanding Achievement in Opera for their production of Vivaldi’s Bajazet at the Royal Opera House’s Linbury Theatre, and Best New Opera Production went to the Royal Opera’s staging of the Janáček opera Jenůfa.

Outstanding Achievement in Dance was won by Arielle Smith for her choreography of Jolly Folly – part of English National Ballet’s Reunion, a project converting five films made in lockdown into live dance performed at Sadler’s Wells. Revisor, a collaboration from choreographer Crystal Pite and theatre-maker Jonathon Young performed by dancers from Kidd Pivot at Sadler’s Wells, was awarded Best New Dance Production.

The star-studded Olivier Awards ceremony featured performances from all nine nominated musicals; Anything Goes, Back To The Future – The Musical, Cabaret, The Drifters Girl, Frozen, Get Up Stand Up! The Bob Marley Musical, Moulin Rouge! The Musical and Spring Awakening – plus a performance from Life Of Pi.

The show culminated in a special musical tribute to legendary theatre composer and lyricist Stephen Sondheim, who died last year aged 91. This was performed by a group of swings and understudies from last night’s performing companies (in recognition of all that the swings, understudies, standbys, and alternates of the West End have done to keep our theatres open) along with the next generation in the form of a choir from performing arts school ArtsEd.

Full list of winners for the Olivier Awards 2022 with Mastercard:

Pride And Prejudice* (*sort of) at Criterion Theatre

Cabaret at The Kit Kat Club at the Playhouse Theatre

Catherine Zuber for Moulin Rouge! The Musical at Piccadilly Theatre

Get Up Stand Up! The Bob Marley Musical – Orchestrator: Simon Hale at Lyric Theatre

Kathleen Marshall for Anything Goes at Barbican Theatre

Best Actor in a Supporting Role

Best Actress in a Supporting Role

Liz Carr for The Normal Heart at National Theatre – Olivier

Best Actress In A Supporting Role In A Musical

Best Actor In A Supporting Role In A Musical

Best Actor In A Musical

Best Actress In A Musical

Hiran Abeysekera for Life Of Pi at Wyndham’s Theatre

Life Of Pi at Wyndham’s Theatre

Back To The Future – The Musical at Adelphi Theatre

To find out more about this year’s Olivier Awards, visit here…