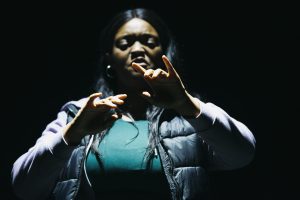 The impressive skill of crafting flowers into thoughtful arrangements, floristry quietly impacts our lives, flowers integrated into various occasions and ceremonies – adding a deeper level of sentiment and meaning. Exploring this art form within her work Fringe First Award Winning Funeral Flowers, writer Emma Dennis-Edwards presents the story of 17 year old Angelique who longs to be a florist and is forced to navigate the care system when her mother is incarcerated. Initially performed in 2018 at the Edinburgh Fringe Festival, the show has gone on to be performed at The Bunker in 2019 and The Roundhouse in 2020 to critical acclaim. Currently on a tour, the show’s last two stops will be at Exeter Phoenix on Monday 9th May and Nottingham Playhouse on Friday 13th May 2022 – with the lead role performed by Sarel Madziya. Emma tells us more about what expect from the show!

Hi Emma, your award winning show Funeral Flowers is currently on tour until 13th May. How are you feeling?

It feels great! It was always my plan to do a regional tour but sadly Covid scuppered my plan for Funeral Flowers‘ national domination. It feels so good to have this show and this story on the road FINALLY!

Funeral Flowers follows the story of 17 year old Angelique who longs to be a florist and is forced to navigate the care system when her mother is incarcerated. What inspired you to explore this narrative further?

The production won a Fringe First Award in 2018 and a Filipa Bragança Award. How does it feel to have been recognised for your work?

It’s no secret that Funeral Flowers changed my life and part of that was how well it did critically so I’m really grateful to have been awarded for my work. What has also been very special is audience reactions to the play and how they have responded to the work, I do not take that for granted and feel very fortunate.

The production was initially performed at the Edinburgh Fringe Festival in 2018 before transferring to The Bunker in 2019 and The roundhouse in 2020. What has the journey involved in terms of adapting the show within the past 4 years?

Well the production has physically changed quite a bit, in Edinburgh it was performed in a flat promenade style. Then in The Bunker we did a kind of hybrid part promenade version of the play with a nod to the immersive nature of the Edinburgh show. To the current version which was performed at the Roundhouse which is in thrust. Also I’m not performing in it, Sarel has been doing an amazing job and has definitely elevated it, which is really exciting to watch.

The production stars Sarel Madziya, and has been directed by Jess Edwards, with set and costume design by Jida Akil, lighting design by Pete Rickards and sound design by Nicola Chang amongst other creatives. How have you all worked together to realise the show?

It takes a village to make a show, and my show has an amazing racially diverse and queer village which I think are the best villages to be in! The show is honestly so well taken care of by all of creatives, there’s no ego and just work and I am forever grateful to my amazing collaborators. We all work well together by essentially staying in our lane! And my incredible producers, Daisy Hale and Sean Brooks have been so supportive and lead the team gently and firmly. I feel so lucky to be working with the creatives that I’m working with whose work I love so much.

I think audiences can expect some laughs and some stickier moments, a truly human experience- it’s messy it’s complicated but it’s full of heart.

It may be cliché, but I hope they come away feeling hopeful – no one wants to leave the theatre depressed right? I also hope there will be more conversations about how we support young people, especially those who are most vulnerable.

Funeral Flowers is currently on tour, and has previous been performed at Quad Hall South on Wednesday 30th March, North Wall Arts Centre on Saturday 9th April and Liverpool Everyman on Wednesday 13th and Thursday 14th April 2022. It’ll also stop off at Exeter Phoenix on Monday 9th May and Nottingham Playhouse on Friday 13th May 2022.