Inspired by American journalist turned playwright Maurine Dallas Watkins’ 1926 play Chicago, drawn from her time covering Courthouse Place for the Chicago Tribune, renowned performer and choreographer Bob Fosse would go onto adapt the production into what we now know as a sultry, jazz-centric take on the media circus and the fickle, fleeting nature of fame – the tale of Roxie Hart, a bright-eyed aspiring star willing to do whatever it takes to make it big time versus Velma Kelly – a well seasoned veteran on the verge of disappearing from the limelight thrown together as a result of their crimes, the multi-award winning musical returning to the New Wimbledon Theatre to reprise the musical’s 40+ year legacy. 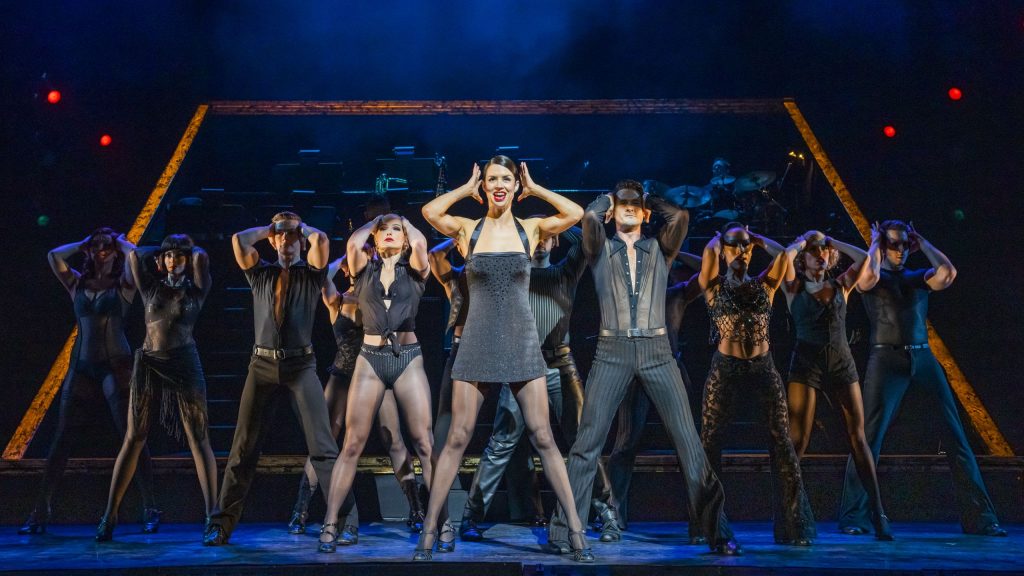 An interplay between both starlets, Chicago spotlights womanhood at one of its darkest moments, women wronged morally or in the eyes of the law, crimes of passion uniting the cell mates at County Cook Jail. Velma Kelly (Djalenga Scott) kicks off the evening with the iconic “All That Jazz”, a self assured, extroverted presence who knows her worth, knows she’s the star of the show both on stage and in reality and wants for everyone else to know it too! Roxie Hart (Faye Brookes) a naive yet flirtatious energy on the rise entangled in a passionate affair that inevitably ties her to her present, confined fate – “Funny Honey” and “Roxie” both playfully snapshotting her one-sided relationship with gullible husband Amos Hart (Jamie Baughan) versus her need for the spotlight.

Scott’s confident, sustained presence versus Brookes’ energetic, youthful outlook brilliantly clash when initially confronted with one another and combine out of necessity when reality hits both of them , Sheila Ferguson‘s Matron ‘Mama’ Morton takes on a calming air, an all seeing, all hearing , all knowing feature of the courthouse confirming her authority with number “When You’re Good to Mama”, Russell Watson‘s Billy Flynn is sauve – a lawyer who has seen it all and can take on practically any case, “All I Care About” is sung effortlessly, the tenor showcasing his effortless skill and prowess. The “Cell Block Tango”, performed by Delycia Belgrave, Billie hardy, Hollie Jane Stephens, Emily Goodenough, Michelle Andrews and Djalenga Scott is an empowered acknowledgment of sisterhood, the ensemble in general an integral facet of Chicago performing Fosse’s signature sleek, sultry, athletic Broadway jazz sequences with style, and delivering John Kander and Fred Ebb‘s punchy and witty music and lyrics with flair!

Chicago is currently showing until Saturday 21st May 2022 at the New Wimbledon Theatre. To find out more about the production, visit here…

« Previous post
Patricia Gets Ready (for a date with the man that used to hit her) @ Brixton House Review
Next post »
Wild Card: Livia Rita – FUTURA Glitch