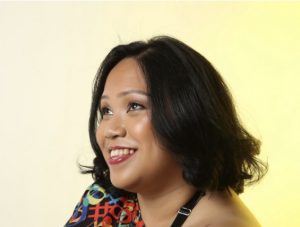 Returning for their latest cultural event, arts development organisation Certain Blacks are set to host the Ensemble Festival, a free event taking place at the Royal Docks on Sat 23rd July showcasing a range of acts specialising in physical theatre, dance, circus, music and digital. Currently on tour with their latest production Look Mum No Hands, disabled-led children’s theatre company Daryl Beeton Productions and female-led circus and dance company Mimbre have joined forces to explore themes of freedom, risk and independence and how whether you’re disabled or not, one changes, the festival marking the next step in their performative journey. Taking on joint lead with fellow freelance performer Danielle Summers, inclusive dance artist Laura Dajao tells us more about exploring the show’s themes, working in collaboration with Kat Ball who she shares the role with and Sophie Page, Danielle Summers understudy and what she has taken away from working on the production.

Hi Laura, you’ll be starring in Daryl Beeton Productions and Mimbre’s show Look Mum No Hands on Saturday 23rd July at Certain Blacks’ Ensemble Festival. How are you feeling?

Really excited! Firstly because we’ve been performing on tour since April and now we are on home ground in East London  – I live in Newham where we will be performing at ensemble festival. Secondly because it’s been really fun touring this piece With co-star Danielle Summers.

Look Mum No Hands is a tender tale of friendship and coming of age. It explores themes of freedom, risk and independence and how whether you’re disabled or not, one changes. The production sees you collaborate with fellow performer Danielle Summers, how have you both worked together to realise the show?

It felt quite natural and a genuine friendship formed right at the beginning meeting at the audition at the beginning of the year. Based on the narrative from Daryl and Lina from Mimbre – realising the show was a case of really exploring physicality with both the wheelchair and acrobatics with a narrative which was really fun. An enormous amount of trust between us meant that we could really indulge in the physicality of this show using both lived experience of the themes and discovering testing limits.

You’ll also be sharing the role with disabled dance artist Kat Ball as the show tours the UK, with fellow freelance dance artist Sophie Page understudying Danielle. How have you all collaborated to realise the show?

It was amazing to work alongside these amazing artists to create some of the acrobatics, lifts, shared lived experience that really made the show come together. This co-production has been incredibly inclusive and accessible knowing that we have the support of these artists. The infrastructure which has been built within this collaboration has been one of the most inviting and welcoming of all our talents and I personally feel honoured to be a part of such an amazing team.

Daryl Beeton Productions is a disabled led company creating accessible theatre and Mimbre is a female-led company integrating circus and dance to illuminate human connection and promote positive images of women. What does it mean to yourself to work with both companies?

It is such a privilege, and I am extremely humbled to have been accepted into being a part of this co-production – as this has been one of the most inclusive productions I have ever been a part of – in terms of everything that these two amazing companies represent as well as their process, identity and ethos.

What have you learned/taken away from working on the production?

Circus skills-collaboration to work within a circus environment. But also the inclusive practice that this co-production has implemented in its execution of this show. There are so many life skills as well as artistic practices I will take away from this incredible collaboration and I hope to pass on the values, core practices, theatre and outdoor work in everything I am a part of or create in the future.

A rollercoaster of emotions – to smile, laugh and then be shocked – also to join in with some movement should they want to!

A different perspective of disability- to also understand that transparency and honesty starts with a conversation and not assumptions.

Look Mum No Hands will show as part of Certain Blacks’ Ensemble Festival on Saturday 23rd July 2022. To find out more about the production and festival, visit here…