What lies beyond planet Earth has been a point of fascination for millennia, missions to space  journeys that help to further our understanding of what is, yet also inspiring yet more questions. A vast realm that inspires imagination and brings with it a sense of magic, no wonder space and beyond has been the place to backdrop many a sci-fi story. A playful look at the missions of astronauts Mary and Chris, Mary Chris and Mars contemplates what it is to be human and our place within a larger ecosystem. 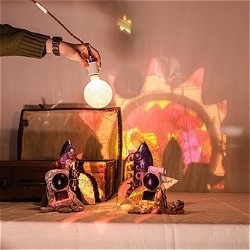 Forming part of this year’s Korean Showcase at the fringe, Trunk Theatre Project‘s Mary, Chris and Mars dynamically transports all from the four walls of the intimate Red Lecture Theatre to the expansiveness of what lies beyond us, the cast cleverly shifting between playing the roles of Mary (Cho Yeeun) and Chris (Ryu Wonjun), to the astronauts being personified by intricate glove puppets that explore the terrain around them once off board their spaceships. Mars (Park Hyeon) is played with a fun, over – the -top, high energy and charisma. Trunk Theatre Project beautifully play with our perception, able to capture the wonder I’m sure felt when taking on such missions and presenting weird landscapes and scenarios – such as been confronted by a giant lizard that keeps the hour forever moving.

Mary, Chris and Mars is able to gauge the moods established and shift them well, meandering from the comical, to the more heart felt, and this is great to experience. Yeeun writing and directing a fun, adventurous show that seeks to connect all. The cast inject the show with an enthusiasm and charm, and their camaraderie speaks volumes, aiding the show’s slickness. Fusing both the English language and Korean, the show is inclusive and international, merging cultures and cultivating a strong sense of community. A soulful, electric guitar score by Park Jinho elevates the show, and gives it an ethereal air, an old school projector at one point depicting Earth and translating Korean phrases into English striking, a pinball type display manipulated by the cast depicting the movement of the planets mesmerising to watch.

Mary, Chris and Mars is an inventive, sentimental, authentic hour – the cast showing what can be accomplished from a minimalistic set.