Recognised as a UNESCO ‘Masterpiece of the Oral and Intangible Heritage of Humanity‘, the traditional Korean art form Pansori is a genre of musical storytelling typically performed by a singer and drummer. The name broken down into its core, Pan or P’an – meaning ‘open space’ and sori meaning singing or sound and has existed for the past four centuries now. Exploring the tale of the ‘Dragon King’ in their Pansori performance, Theatre Moksung present Puppet Pansori Sugungga, which forms part of this year’s Korean Showcase. 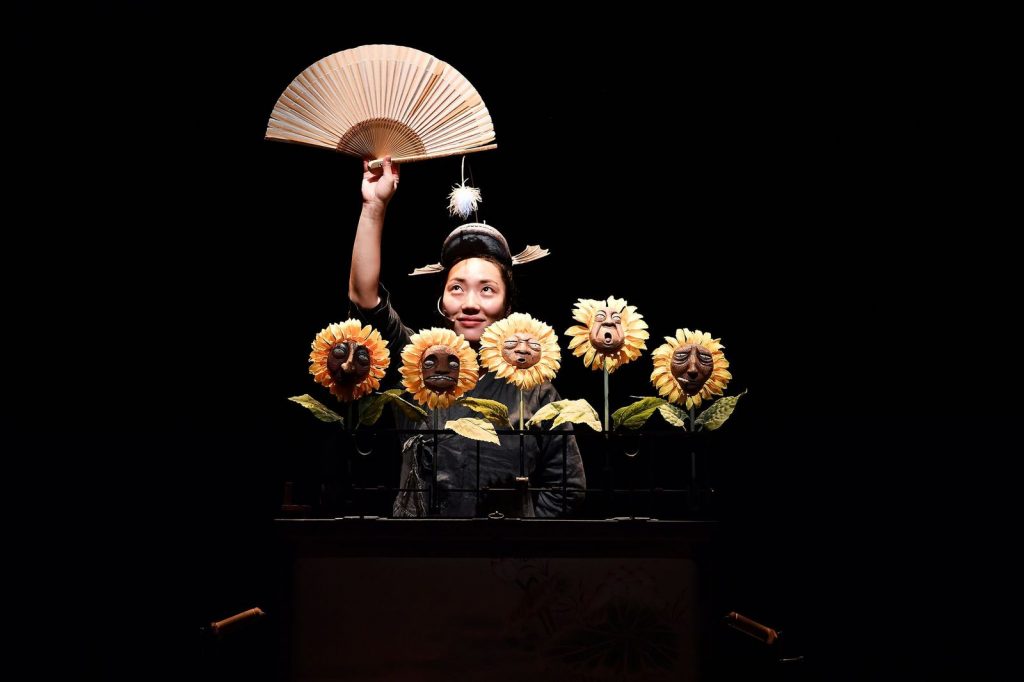 Staged in the intimate setting of Venue 9 on Niddry Street, Puppet Pansori Sugungga reveals a quietly elaborate world, one situated under the sea, the other on land – characterised minimalistically via a portable travel box consisting of traditional Korean painted backdrops that manually transition when needed. The flighty, upbeat tones of cellist Jan Pech and energetic, enthusiastic turns by performer Noh Eunsil who takes on the role of the Dragon King, Turtle and Rabbit really make for a mesmerising show, the duo working in tandem to make the small world, gigantic.

What ensues is a 50 minute foray into Turtle’s pursuit to finding the perfect remedy to cure the Dragon King’s ailment, puppets personifying these creatures, masterfully manoeuvred and characterised by Eunsil. We’re gripped by the adventure taken on and this fantastical world established, Eunsil’s taking on of these three characters a true test in stamina as she carries the narrative throughout and really helps to establish the show’s humour and sense of fun.

There’s a beautiful synergy between sound and story, both working together to heighten the narrative further. It’s clear one solely couldn’t work without the other, the visual capturing the real world, the sound capturing the spiritual realm, the invisible. A captivating show and brilliant introduction to Pansori for me personally, a joyous, inventive watch!

Puppet Pansori Sugungga will show until Saturday 20th August 2022 at theSpaceUK: Niddry Street – Venue 9 as part of this year’s Edinburgh Festival Fringe. To find out more about the production, visit here…