In an image based world reinforced by the barrage of photos and videos made easily accessible on social media platforms, we find ourselves at the crossroads of a very toxic realm, the constant comparisons towards others seemingly doing well, motivations to one up and do better – this possibly manifesting itself in the form of overly obsessing about oone’s appearance and in the long run, being of detriment to one’s physical and mental health. An exploration of the impact of a never ending cycle of social media and tech, Modern Day Chronicles present cautionary tale Seen 00:25. 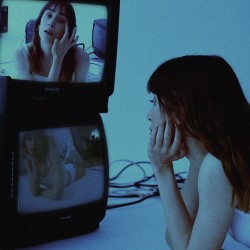 Couped up in the confines of her bedroom, Miss A (Candela May) lives and breathes social media, self recorded logs forming a large part of her day, fantasies of getting together with crush, actor of Twilight fame Robert Pattinson dominating her thoughts. With only the four walls, screens and anonymous interactions giving her any sort of feedback, Miss A slips into the dangerous depths of anorexia, an eating disorder that sees patients resort to keeping their body weight as low as possible and with this, suffering with damaging consequences.

Modern Day Chronicles encapsulates the warped reality of Miss A, May very cleverly but hauntingly live recording snippets on smartphones, tablets and laptops that forever play throughout, the build up in visual and sound perfectly summarising where we’re at societally, technology embedded within what we do and there never seeming to be an escape from it. Seen 00:25 identifying the overwhelm of our digital world yet its hypnotic pull. The ordering of a cupcake, only ever to be looked at but not properly consumed and the incentivising of staying super skinny, symptoms of the mental disorder which are tough to watch. We’re presented with how anorexia materialises and how when not treated can escalate, the production’s timeline structure further heightening just how our days are structured around digital and the amount of hours spent on platforms – a cautionary tale for Generation Z and generations to follow who currently live in a world where we’re surrounded by tech in a way we haven’t been before.

Seen 00:25 is currently showing until Sunday 21st August 2022 at C Venues – C Aquila Studio as part of this year’s Edinburgh Festival Fringe. To find out more about the production, visit here…