Societally, it hasn’t been the norm for mothers to speak up about their experiences of motherhood, as if this life changing experience were not allowed to be discussed openly and challenge idealised visions as to what the perfect mother should look like. This incredibly unhelpful, and with it creating anxieties when experiences do not match up to these so called norms. Drawing for her own personal experience of motherhood, Hanna Vahtikari alongside her husband Marzi Nyman present Raging Mother, an authentic account of what bringing up children has looked like to them. 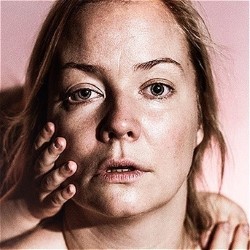 An intimate gig performance, Raging Mother is Vahtikari’s confessional space, a space whereby she lets go of upholding the perfect image of motherhood and tells us about the births of her two children, expectations held by family members when on visits to the children’s grandparents, keeping up appearances when out on jogs around the neighbourhood and bumping into acquaintances, taking her children out to the park, her getting ready to go out after months of staying at home – one of the show’s funniest moments – as she attempts to put on clothes that no longer fit whilst her two children pull and tug at her dress decide that this is the perfect time to fight for her attention most – helium pitched voices supplied by Nyman very funny, to feeling the necessity to guide bedtimes as she deems her husband’s pacing too slow when taking up the responsibility.

All of this accompanied by Nyman on the electric keyboard, Raging Mother is an entertaining yet thoughtful encounter – Nyman giving his wife the stage to air her perspective yet there as a support system to her – a beautiful partnership. Vahtikari speaking of how they challenge gender stereotypes, Vahtikari not as romantic and emotional yet Nyman being more so, she contemplating them switching roles at points in response to their strength. An insightful hour that helps to demistify motherhood.

Raging Mother is currently showing until Saturday 20th August 2022 at Zoo Southside – Studio as part of this year’s Edinburgh Festival Fringe. To find out more about the production, visit here…